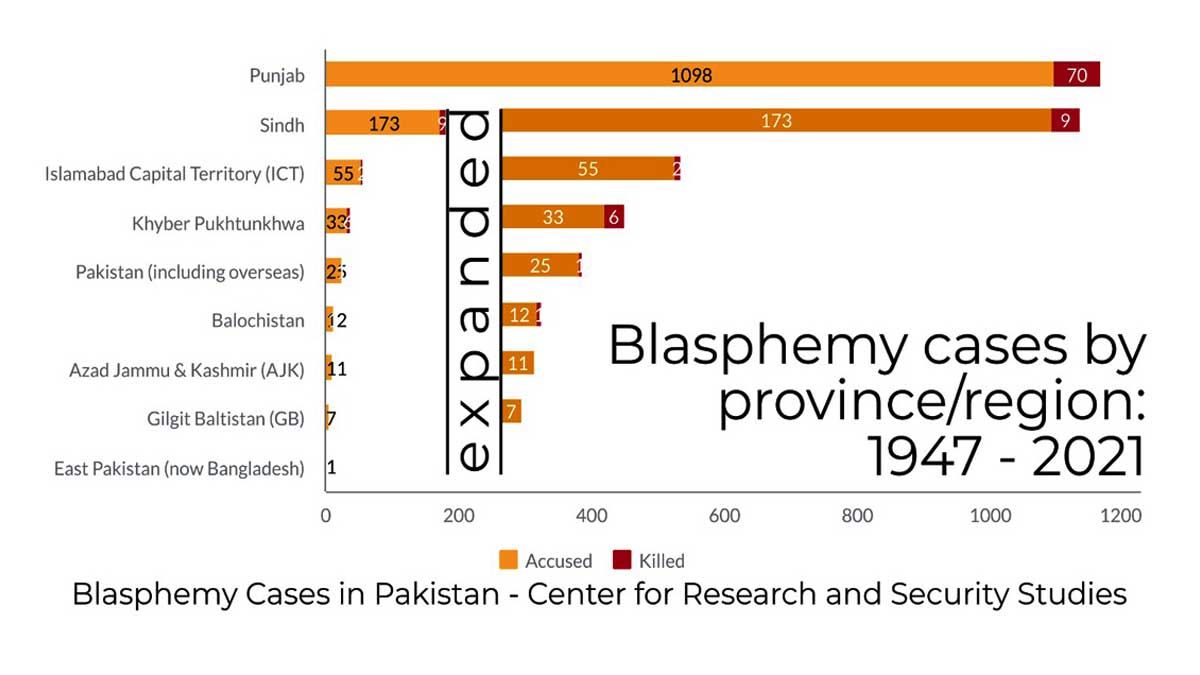 Around 89 citizens have been murdered in extrajudicial killings related to blasphemy cases since the inception of Pakistan, says a report.

According to the Centre for Research and Security Studies (CRSS) report, at least 89 citizens have been killed in 1,415 accusations and cases of blasphemy in the country since 1947. From the country’s independence to 2021, 18 women and 71 men were extra-judicially killed over blasphemy accusations. The allegations were made against 107 women and 1,308 men.

The CRSS report further reveals, out of the total, 1,287 citizens were accused of committing blasphemy from 2011- 21. “The actual number is believed to be higher because not all blasphemy cases get reported in the press,” More than 70 percent of the accused were reported from Punjab.

The report looks at blasphemy-related violence as reported in secondary sources such as newspapers and tallies the victims, perpetrators, role of law enforcement and number of charges.

The data showed that 55 cases were filed in the Islamabad Capital Territory, which was more than the cases of blasphemy in Khyber Pakhtunkhwa and Azad Kashmir put together.

The report said Islamabad High Court had previously suggested to the legislature to amend the existing laws as such laws had been misused for many years, however amending laws will give equal punishment to those who level false accusations.

The debate on Pakistan’s blasphemy laws and their socio-political consequences ranges from the argument “people disrespecting Islam should be punished” to “people are falsely accused to settle personal scores”.

Moreover, almost always, murderers argue that the victims having committed an unpardonable religious crime are ‘wajibul qatal’, a highly controversial term that loosely translates to “worthy of being killed”.