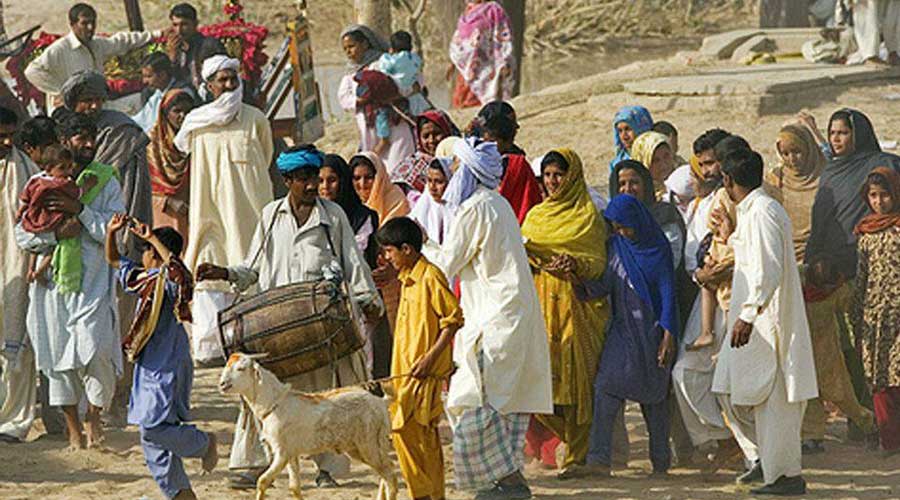 Saraiki culture combines with erstwhile Indus valley civilization and influenced by the Persian and Muslim culture giving it a highly rich history with its own personal culture, traditions and language.

More than 40,000 years ago, the Saraiki region was part of the Indus valley civilization. This region had been conquered several times by people of west i.e. Aryans, the Greeks and Persians. The influence of Persia remained the most dominant for a number of centuries which can be seen from its Persian art, architecture and poetry as a part of the region’s culture. After the Muslim conquest of the region, the religion Islam spread throughout the area and it became an influential and important Islamic center.

99 percent of people living in this region are Muslims and the majority are Sunnis while Shias are far less. It is kind of home to Sufism because there is a shrine of Hazrat Bahaud Din Zikaraya and Hazrat Shah Rukn e Alam, these are the major shrines in this region. Some other tombs like Sakhi Sarwar are also present.

Saraiki culture maintains that have a separate language and culture, but their language is often seen as a dialect of Sindhi or Punjabi. Saraiki language has three dialects that are spoken in Sindh.

Many dialects of Saraiki language have been emerged until now since the inception of Pakistan. This language belongs to Indo-Aryan languages that are a standardized language. This language is spoken by the people that live in the Saraiki region which is combined known as Saraikistan.

Different dialects of Saraiki language are spoken by 18 million people. Saraiki speaking people are mostly found in the part of Southernmost half and Northwest of Punjab, southern district of Dera Ismail Khan, and in some of the areas of Khyber Pakhtunkhwa. Also, it is spoken in the adjacent border region of the Sindh and Baluchistan provinces and Afghanistan.

Multan – A mix of Sufism and Saraiki Culture

Multan is the oldest city in South Asia that has a combination of old and new Pakistan culture. The city has a number of temples, tombs, shrines and cathedrals with a historic fort.

Multan remained an important trading center of medieval Islamic India and attracted a multitude of Sufi mystics in the 11th and 12th centuries. Sufism has dominated the region ever since. Urban areas of Multan have special elements of Sufi music and dance. These two elements are their ways to celebrate ceremonies or festivals.

Jhookmar is the tradition of Saraiki fold dance that was originated from Multan and Baluchistan. A number of talented people are playing their part in the music industry who belong from this region like, Abida Parween, Essa Khailwi, and Attaullah Khan.

Sohanjna is the most famous vegetable and Sohan halwa is a traditional dessert that is famous nationwide.