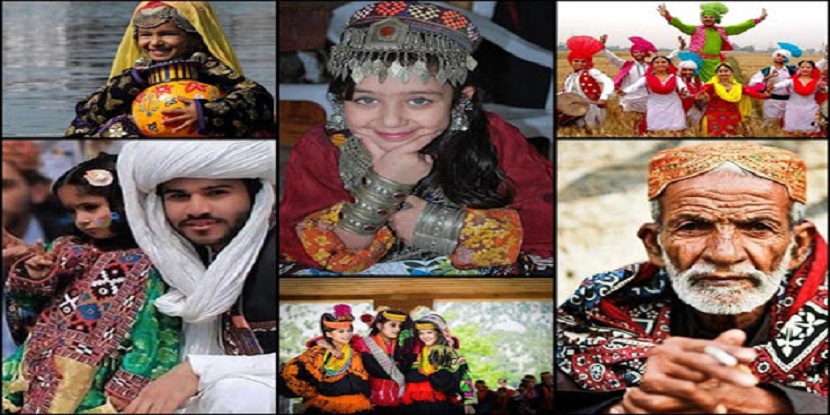 These ethnic groups have been highly affected and influenced by its neighboring countries. Every ethnic group is different from others in a way that their dresses, religions, food is far more different from others. Specifically, their Islamic practices have differences with pre-Islamic customs. From the Indian subcontinent, Pakistan became the first region that was fully influenced by Islam. Pakistan has the most distinct Islamic identity.

There are 73-76 languages actively spoken in Pakistan. It shows that if one travels, within an hour or more, as one passes to the districts, languages keep on changes and each language is unknown to other groups. Whereas, the most popular language belongs to the largest ethnic group which is usually more modern and has ancient literature. Most of the languages belong to the Indo language group, i.e. Urdu the language.

The Pakistani nation is highly fond of literature. Its diverse culture inclines towards different styles and poetic forms with different languages and different literature. Pakistani people consider ghazal and qawwali as their treasure.

Many Pakistani TV shows and programs have been successfully amused their fans at the national level and international level through their meritorious literature-based shows. These days, coke studio is the center of attention for many people in the country.

This nation had a great singer like Nusrat Fateh Ali and the poets like Ilama Iqbal, Faiz Ahmed Faiz, Parveen Shakir, Ahmed Faraz, Jaun Elia and many more. The poetry of the country’s poets has written poetry in many different languages like Urdu, Persian, Siraiki, Pashto, Punjabi, etc.

The craft of Pakistan is the most famous factor of Pakistan that its truck art is the world’s most famous art, which is passing down through generations. Its craft consists of an overabundance of aesthetics, material, and styles.

Sufism has great importance in Pakistan. Sufis have different traditions with different styles like meditation, poetry, dance and whirling, etc.

Sufi poetry contains unifying messages of love for God and spirituality has special popularity in it. Many people in the country like to follow it by isolating themselves from the world, but due to a thickly populated country, there is no special place to be isolated.

Cricket is the main and most attention-drawing sport for Pakistanis. Although hockey is the national sport, cricket still has much importance than all sports. People of the country take out special time from their busy routine to enjoy cricket matches.

Weddings are the major aspects of Pakistanis through which their different cultures can easily be judged. Their single wedding ceremony introduces all the elements of their traditions. Their preparation starts a month before like heavy dresses, special foods, traditional decoration, etc.

Hundreds of more aspects define the culture of Pakistan, but it can easily be understood by touring the whole country.