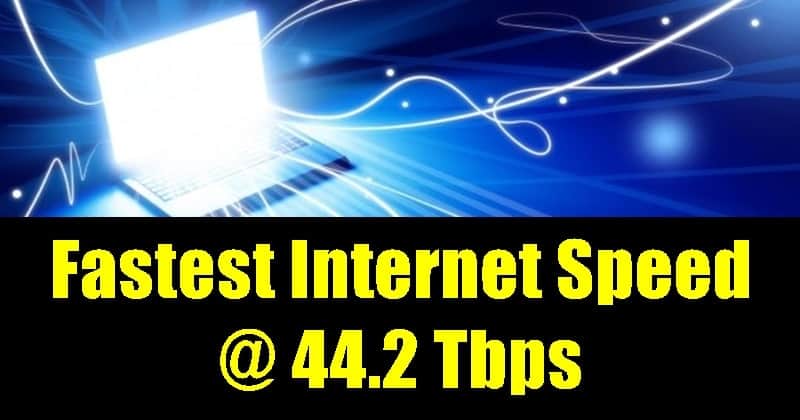 Scientists in Australia managed to test the world’s fastest broadband internet speed which is 44.2 Tbps. The scientists from Monash, Swinburne, and RMIT universities claimed that with this new breakthrough speed people will be able to download 1,000 HD movies in a second. The current broadband speed in Australia is 11 Mbps. The newly developed connection is 4 million times better and faster than the regular connection.

Dr. Bill Corcoran who is the co-lead author of the research said that the existing system will be upgraded in order to meet the escalation in demand for internet connections. He further added that we are analyzing the situation regarding how far the saturation in internet demand goes in 2 to 3 years but as of now it is showing that we might need to upgrade the internet capacity as there are an unexpectedly high number of citizens who are counting on the web to work from home, online shopping, go digital, online streaming and socializing.

The special group used a replacement device that replaced 80 lasers with one piece of kit that is referred to as a micro comb. This discovery of the world’s fastest internet speed of 44.2 Tbps will be enough to meet the demand of 1.8 million residents in Melbourne, Australia along with for other billions of users on the planet.

According to Dr. Bill, “We have established something that will be enough to satisfy the future needs. Not talking about online streaming services such as Netflix but rather at a broader level. The high speed data will be beneficial for future transportation and driving driverless cars. It will also be helpful in drugs, education sectors, e-commerce and in a lot of other industries”.

RMIT’s Arnan Mitchell said, “We are eager to make integrated photonic chips that would empower this type of knowledge rate to be attained across existing optical fiber links with an insignificant budget”.

The research is published under the journal Nature Communications.