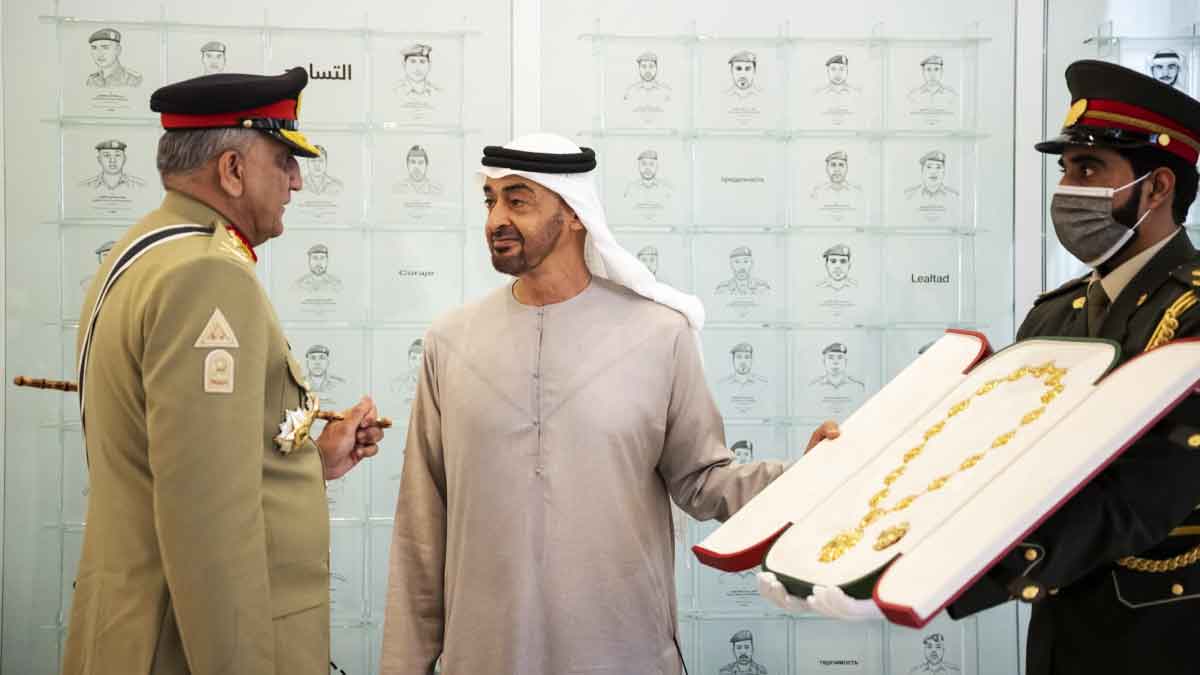 The highest civil honour of UAE, the “Order of the Union,” was presented to Chief of Army Staff General (COAS) Qamar Javed Bajwa on Wednesday during a ceremony in Abu Dhabi.

According to the ISPR, COAS received the medal from UAE President His Highness Sheikh Mohamed bin Zayed for his important achievements to strengthening ties between the two countries between the countries.

The remarkable distinction has been given to notable GCC and international individuals including King Salman bin Abdul Aziz of Saudi Arabia, President Xi Jinping of China, former US President George Bush, German Chancellor Angela Merkel, and many others.

The two leaders also spoke about a range of current regional, international, and issues of shared interest. They concurred that Pakistan and the UAE have a long history of friendly relations and a firmly ingrained sense of brotherhood that is evolving into a long-lasting alliance.

Back in June, General Qamar Javed Bajwa received the King Abdulaziz Medal from Saudi Crown Prince Mohammed bin Salman in recognition of his “major contributions in defence cooperation” between Pakistan and Saudi Arabia.

To be clear, the Order of King Abdulaziz, which bears the name of Saudi Arabia’s founding monarch, King Abdulaziz Al Saud, is regarded as the nation’s highest civilian distinction.

The army chief travelled to Saudi Arabia for official work. Topics discussed included issues of shared interest, bilateral defence and security cooperation, and regional peace and stability. Strengthening defence cooperation in the areas of joint training, air defence, counterterrorism, and communication and information domain was agreed upon by both parties.

The award was presented to the army chief by the kingdom’s first deputy prime minister and defence minister, Crown Prince Mohammed bin Salman, in recognition of his outstanding work in advancing Saudi-Pakistani ties.

Shortly after, the army chief was praised for obtaining the award by Prime Minister Shehbaz Sharif. The Pakistani people and the armed forces were given a magnificent honour, the prime minister wrote on Twitter.