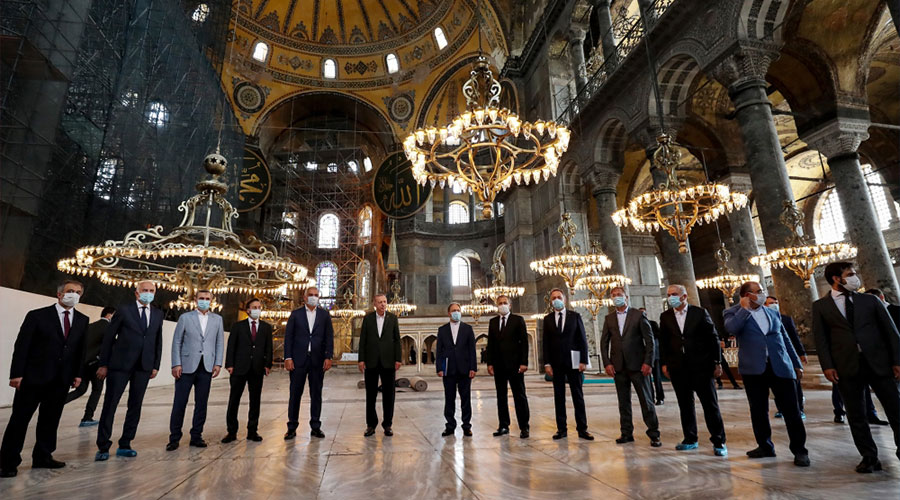 The quick visit of Erdogan was to inspect the conversion work before the Friday prayer as some 500 worshippers are set to attend Muslim prayers at the UNESCO World Heritage site on Friday.

The country’s religious authority Diyanet has said the Christian icons would be curtained off and hid during prayer times. The historic mosaics would be concealed with either curtains or lasers when the first prayer will be held.

World reacts to Turkey reconverting Hagia Sophia into a mosque

The centuries-old structure, listed as a World Heritage Site became a museum in 1934 underneath the Turkish Republic founding father Ataturk.

But last week, the Turkish court canceled the status of Hagia Sophia as a museum while explaining that using the site for anything other than Mosque is illegal.

While addressing, Turkish President defended the decision by saying that country uses its right, the site is still open for everyone, Muslims, Non-Muslim, and foreign tourists.

Hagia Sophia was built as a Christian Cathedral in the Byzantine empire by its ruler Justinian in 537.

With a large Dome, at that time it was assumed to be the world’s largest church and building.

In 1204 Crusaders invaded the city and took over the site.

In 1453 Ottoman Empire Sultan Mehmed II took over the city of Istanbul which was formerly known as Constantinople and offered Friday prayer in the Hagia Sophia.

The Ottoman Empire converted the structure into a Mosque along with inscribing Arabic religious calligraphy.

After centuries, in 1934 the site was turned into a museum in order to make Turkey a more secular country.

The Hagia Sophia is Turkey’s most famous tourist spot as it hosted over 3.7 million visitors every year.