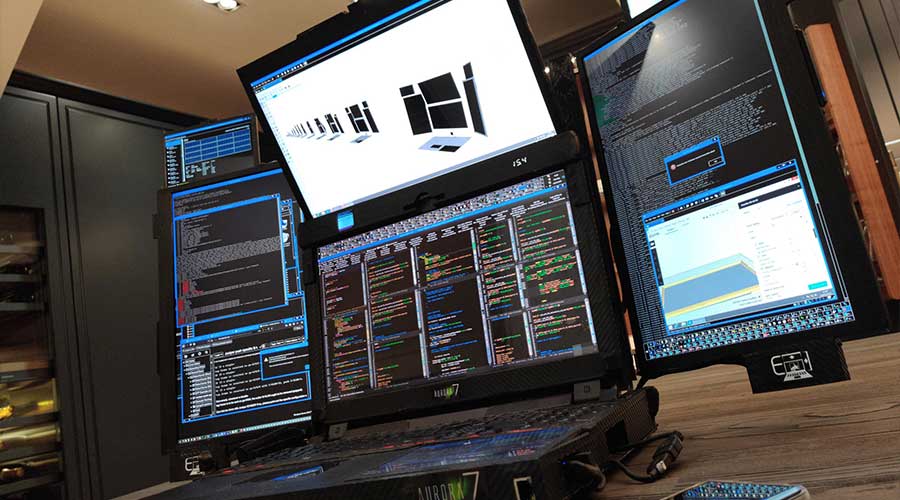 A company called Expanscape has created the most Inspector Gadget-like device, it’s a laptop prototype called the Aurora 7 (a working title) that puts seven screens in front of the user.

The Aurora 7, attached to its humongous black box of a chassis are six extra displays that extend out in every direction away from the main screen, each showing its own window and application.

This is the prototype of a 7 screen laptop, manufactured by Expanscape, a British company. Possibly, all these screens are engineered to fold up onto themselves to create a flat profile which 4.3 inches thick laptop can be carried in a bag.

This laptop would be in a position to be used for programming, designing, stock exchange, cybersecurity, and for a lot of other high-level purposes.

In usual practice, there are one or two laptops at work station but after seeing these 7 displays of different sizes, one can be stunned. But one should keep in mind that this is the first seven display work station in the world.

Expanscape, the manufacturing company has started receiving the orders in big quantity despite the fact, no price has so far been fixed for this unique laptop.

The prototype of the Aurora 7 includes 17.3 inches four monitors out of which two are landscape and two are portrait style. Three are the displays of 3 inches each. The strong chassis controls the whole system which seems like a transformer of the laptop. The weight of the prototype is around 26 pounds.

The company is hopeful that its weight could be 22 pounds after it takes the shape to market finally. It has an Intel Core i9-9900K processor and 64 GB of RAM. As future advancement, the company plans to use the Nvidia RTX 2070 instead with options for the AMD Ryzen 9 305o*processor or Intel’s i9-10900K.

Two batteries have been installed with this computer which remains operational for two hours without recharging. One battery is attached to the computer and the other one is attached to the displays. Calling a machine a Laptop with zero compromises, the company says that Aurora 7 was conceived as a “proper mobile security operation centre”.

The Aurora 7 is just a prototype at this level, Expanscape is selling the pre-release version. Interestingly, those who are interested in buying this machine will have to sign an NDA about the pricing which shows that price may not be low.