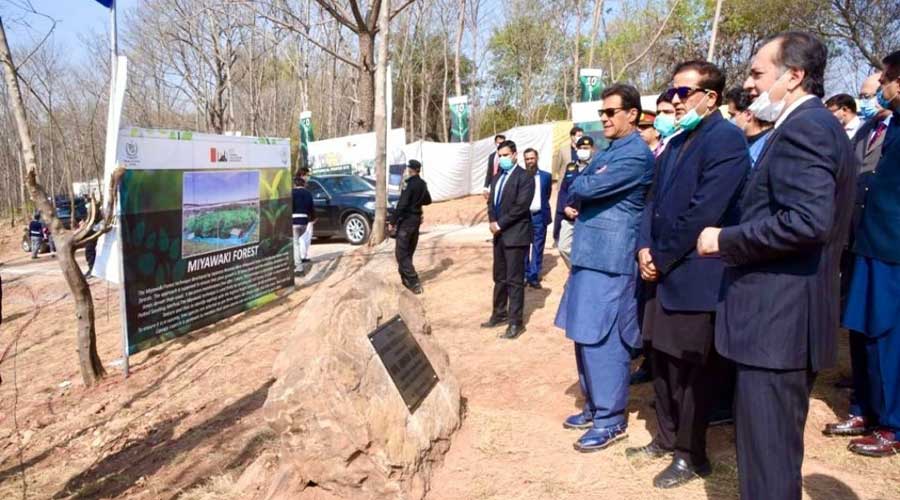 Addressing the ceremony, the premier stressed the need for planting trees to bring a positive change and improve lives of the young generation and vowed that his government would make a “green Pakistan” by planting 10 billion trees.

Previously, Special Assistant to the Prime Minister on Climate Change Malik Amin Aslam, said while addressing participants of a press conference, the government will successfully achieve its target of planting one billion saplings by the middle of this year.

“The biggest weapon to tackle challenges of climate change is the Ten Billion Tree Tsunami initiative. As we restore destroyed forests, in the first phase the plan is to plant 3.2 billion saplings till 2023. We call it the Ten Billion Tree Tsunami because the present government is here to stay. We are on target so far. Numbers of saplings in nurseries across the country have gone from 90 million to 300 million,” he said, adding the first phase of plantation will be completed by June/July 2021.

Since the last two decades, the country has been listed among the top 10 countries to be most vulnerable to impacts of climate change. Now is the need to address this issue on urgent basis, as it badly affects the economy, water resources, national security and so on.

Special Assistant to the PM further said, “Scientific study shows that average temperature in Pakistan has risen by 1°C. This may seem less but the rise can be disastrous especially for agriculture and the economy. The variability of rains has increased by 20pc. This means the timing of rainy seasons have shifted, while summers have extended. Every year an extra day is added to the summer season.”

According to the SAPM, urban flooding such as the one witnessed in Karachi last monsoon was a new threat as cities and towns turn into concrete jungles.

“Today Karachi has turned into a heat island. The previous government is responsible for wiping out 70pc trees and greenery in Lahore alone. These phenomena are a reality. The best solution is planting more trees, especially in cities. The numbers of glacial lakes in Pakistan’s North have also increased from 50 to 130, according to estimates, in just three years, which is ‘very’ alarming for us,” he added.

Moreover, various projects fall under the TBTT initiative, like increasing the number of protected areas, bee harvesting and establishment of a wildlife conservation center in Islamabad.