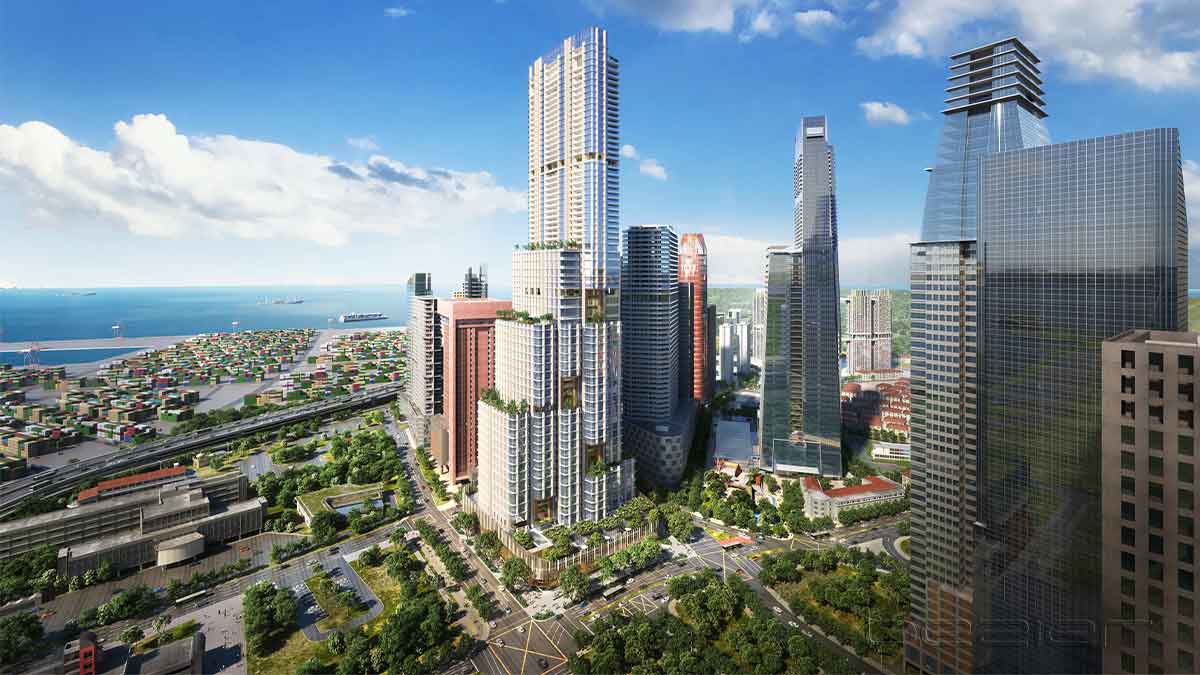 Skidmore, Owings & Merrill (SOM) has unveiled design for a 63-story tower in Singapore, which is set to be Asia’s most sustainable skyscrapers and Singapore’s tallest skyscraper.

The first “supertall” skyscraper taller than 300 meters (984 ft), will soon rise in Singapore.

From 2028, the new tower, 8 Shenton Way, will soar above the city-state in Southeast Asia and offer offices, a hotel, and 34 floors of luxurious homes.

The 1.6 million square feet skyscraper has been designed by Skidmore, Owings & Merrill (SOM), the American architects who also designed Dubai’s Burj Khalifa, the highest building in the world.

The company said that its design was “influenced by bamboo forests” while announcing the intentions. A succession of cascading rectangular forms with rooftop terraces are depicted in digital renderings.

Over 107,000 square feet of elevated green space will be part of the project, and the plants used were especially picked to draw birds and butterflies. The public will have exposure to more over half of the site’s planted areas.

8 Shenton Way will reportedly be one of Asia’s “most sustainable” skyscrapers, according to the firm. Once operational, the 305-meter (1,001-foot) tower will use 55% less energy than necessary to receive the highest sustainability grade from the local government, according to the architects.

Mustafa Abadan, a partner in SOM design of tallest skyscraper, claimed that a variety of strategies, including a facade constructed of terracotta, reinforced bamboo, and heat-efficient glass, will result in energy savings. Meanwhile, the tower’s outside will have horizontal and vertical fins that will reflect sunlight, keeping the building cooler in Singapore’s hot environment.

The city’s district cooling system, an underground system of pipes that directs chilled water into air-conditioning units in buildings to lower electricity usage, will also be interconnected to the tower.

The cylindrical AXA Tower, which debuted in 1986, will be demolished to make way for the tower. The new structure will partially utilize the original base, which would “save material… and minimize the carbon footprint of the building from the get-go,” according to Medrano, who has already started the demolition process.

Singapore has one of the highest density populations in the world, although its skyline is comparatively low-rise when compared to places like Hong Kong, Shanghai, and Shenzhen.

The nation, which is less than half the size of London, has multiple military air bases, two civilian airports, and a building height restriction of 280 meters (919 feet) in downtown areas.

The adjacent Guoco Tower, which was finished in 2018, is the only other structure to date to rise higher than 280 meters. The 290-meter (951-foot) tall building, which was also created by SOM, houses a penthouse apartment that was infamously purchased by British billionaire entrepreneur James Dyson in 2019 for 73.8 million Singapore dollars (at the time, $54.2 million).