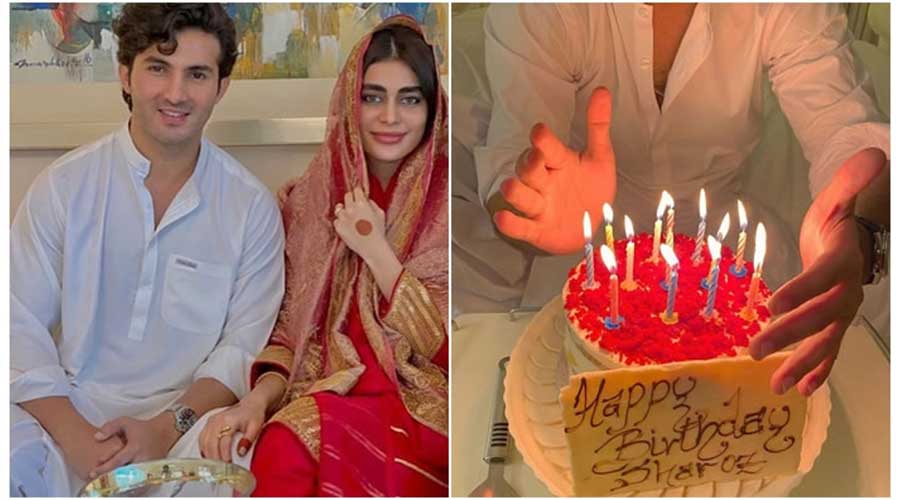 Shehroz Sabzwari the Pakistani actor celebrated his 35th Birthday with his second wife Sadaf Kanwal who called him Darling Soulmate on Instagram post.

The second marriage of Shehroz Sabzwari is hidden to none and people did not stop hating him for divorcing his first wife Syra Khan.

His second wife, model and actress Sadaf Kanwal took to Instagram to extend love for Dilruba actor. She called him her ‘darling soulmate’ and said “Souls recognize each other by vibes, not by appearances. Happy birthday my darling soulmate. Love you.” She also shared the picture of a red-colored cake full of candles.

Souls recognise each other by vibes, not by appearances… Happy birthday my darling soul mate. Love you ♥️

However, the comments section of the Sadaf Instagram birthday post was limited so not everyone could comment but some of their fans congratulated Shehroz Sabzwari in the comment section and showed their love towards them.

Sadaf and Shehroz had been the most gossiped couple of the year as people loved the Syra and Shehroz couple due to Syra’s elegant nature.

A few months back, their divorce and marriage was the hottest topic on social media as pubic started taking interest in actor’s personal affairs when the father of Dilruba actor Behroze Sabzwari came on screen to make people stay away of their personal matters.

Kanwal and Shehroz after being the victim of so much online trolling, appeared in an interview show together where both of them shared their views regarding many things when Kanwal said she did not care at all about the trolls and she is living a happy life.

Many other actors and actresses also supported them. “Jalan” actor Minal khan was one of them who defended their marriage as answering a question of Asim Jofa she said,
“I felt very bad… What people did, hurt me a lot. Nobody deserves such a bad backlash, in my opinion. I can understand that people have different points of view, perspective, and opinions, but you do not know what the actual story is. People just speak without thinking.”