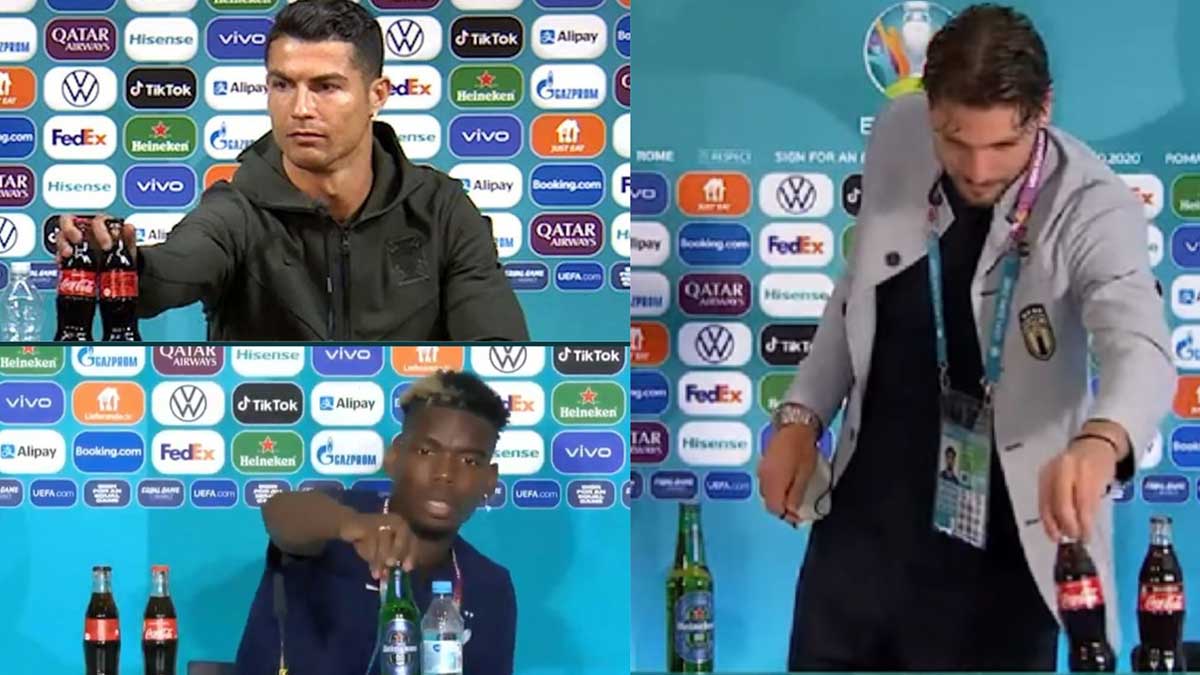 After videos of football star Cristiano Ronaldo putting aside bottle of Coca-Cola during a press meet went viral, other top footballers also followed the trend.

Pogba moved away the beer bottle when he sat down to speak to the media on Tuesday after he was named man of the match in France’s 1-0 Group F win over Germany.

Meanwhile, after Italy’s comfortable 3-0 win over Switzerland, Locatteli was seen replacing the water bottle with Coca Cola in a similar gesture as Ronaldo.

Cristiano Ronaldo shoved away two Coca-Cola bottles put in front of him as he sat down for a Euro 2020 press conference.

He said in Portuguese, “agua,” as he picked up a bottle of water and appeared to encourage others to do the same. “There will be no Coca-Cola.”

The simple gesture had an immediate and dramatic impact: the soft drinks behemoth’s market value plummeted by $4 billion, demonstrating the market’s strength and influence over celebrities and influencers.

The 36-year-old Juventus player, who has nearly 300 million Instagram followers, is known for adhering to stringent physical and nutrition regimes and has previously chastised soft drink use.

Following the Ronaldo snub , stock of Coca-Cola dipped from $56.10 to $55.22, a 1.6 percent decline. According to the Nasdaq index and the New York Stock Exchange, Coca-market Cola’s worth increased from $242 billion to $238 billion.

At press conferences, players are served water, Coca-Cola, and Coca-Cola Zero Sugar, and they “may choose their preferred beverage,” according to the Union of European Football Associations (UEFA), the region’s governing body for soccer.

The statement said, “Coca-Cola offers a variety of drinks to suit diverse tastes and demands, which are available to participants throughout the event.”

In an email to The Washington Post, a representative for Coca-Cola, an official sponsor of Euro 2020, said the company “did not have anything additional to add” to the UEFA statement.