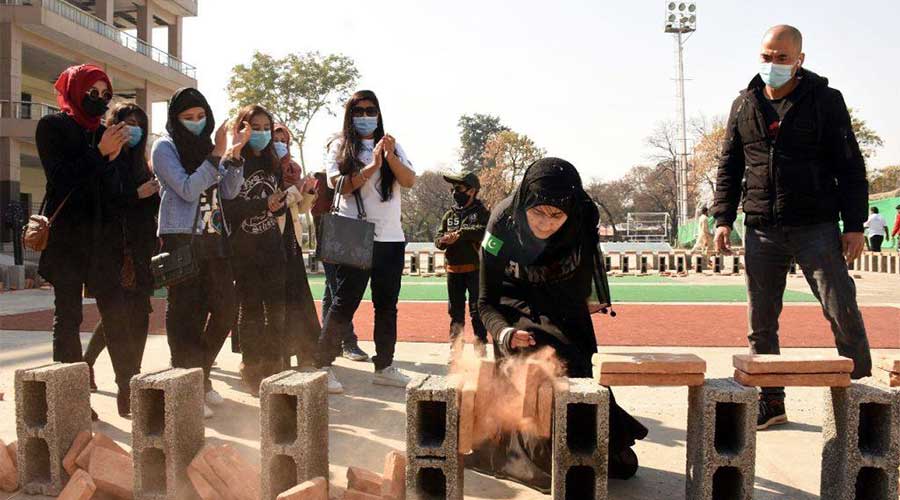 As shown in the video, by making a world record, a girl Neelofar Shirazi from Ughazbanda village is said to have broken 1,000 bricks in 27 minutes at the Jinnah Sports Stadium in Islamabad. She can be seen breaking bricks in the video that has now been sent to the Guinness World Records.

She had a strong background regarding her passion as she has broken 150 bricks last year after which she decided to break 1,000 bricks. She has also won a prize of Rs 50,000 previously.

Neelofer Shirazi belongs from Ughazbanda village in Battagram district and has been living in Islamabad since long. She holds a Master’s degree in Chemistry from the University of Peshawar and is at present, teaching online. To pursue her passion, she started proper training in November 2018 and practiced for two hours daily.

Imtiaz Ahmed, the organizer of the event, said he is proud to work with Neelofar Shirazi. “She has broken 1,000 bricks. We will send her video to the Guinness Book of World Records and put her name in the brick-breaking category,” he said.

“All of this would not have been possible without the support of my parents, my coach, Mr. Chen, and my friends,” Neelofar Shirazi said on the occasion.

She said that as a child she was very shy and cried all the time when someone bothered her. “When someone said something to me in class or in the playground, I used to start crying,” she recalled.

Neelofar says that women in Pakistan are full of potential, they only need encouragement. She added that she had set an example for girls who feel scared to pursue their dreams and goals in the male-dominated society.