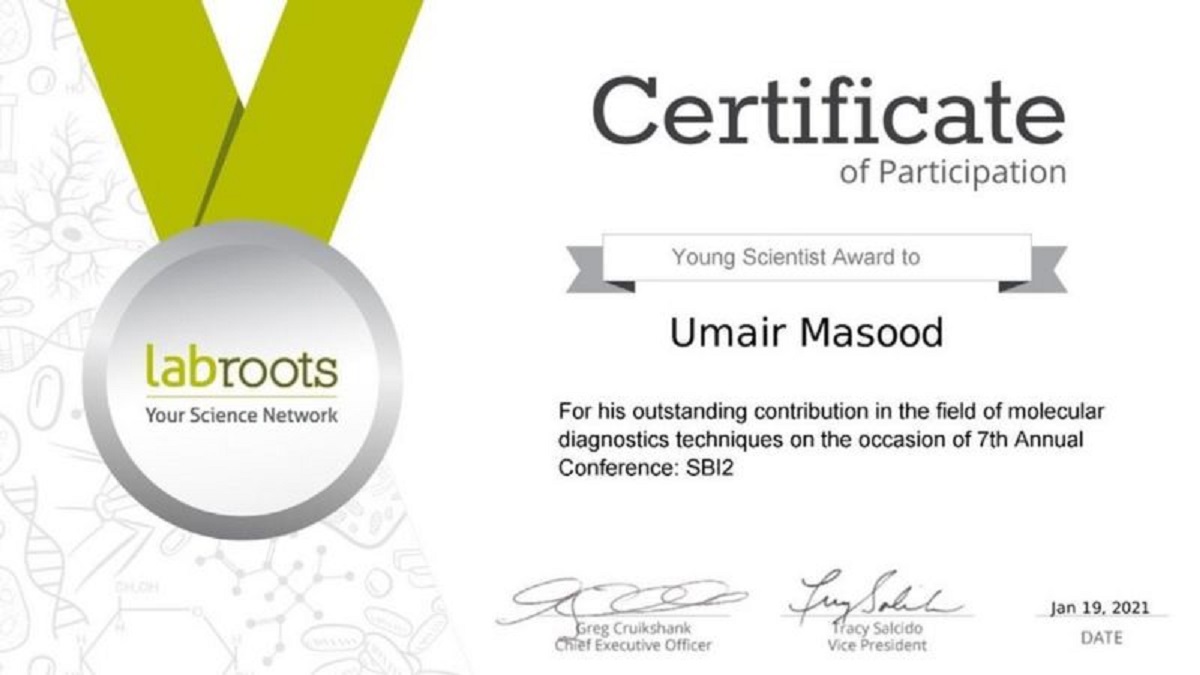 Umair Masood, a Pakistani student in America has become the matter of pride for the country after winning the “Young Scientist Award 2021’ from American Lab Roots Organization at an annual conference on biotechnology.

The young Pakistani student made the country’s name shine. He participated along with other participants of 121 countries, the conference held in January 2021. He is a student of the Comcast University, Abbottabad, he is now an exceptional and distinguished student after his contribution in the field of Molecular Diagnostic Techniques.

In this regard, US embassy Islamabad took to Twitter to praise this exceptional student, “Congratulations! to ?? student Umair Masood who has received the ‘Young Scientist Award 2021’ from the American #Lab-Root organization at a conference in which students from 121 countries from around the world participated.”

Read More: Pakistan is drifting away from science: Noam Chomsky

Moreover, at the conference, Masood presented 2 research papers on Molecular Biology and Biochemistry at the international conference in Australia and the 13th International Conference on Tissue and Regenerative Medicine in the United States. After getting 336 votes, he won the title while his competitors from Israel and Germany received 264 and 164 votes respectively.

“It took me three and a half years [to get this distinction]. I failed in researches multiple times. I was facing financial issues. It was not that easy,” Umair said, recalling his journey to the global recognition while taking to the media.

He further said, “I also got disheartened because of repeated failures and thought of giving up, but then motivation came from within that I can do this.”

“I could not pass the FSc exam with flying colours because I was not the kind of students who are good at learning by rote. I was not an avid reader nor did I like momorising things, but was rather interested in posing questions and learning about new things.”

He then recalled, “I applied to almost all universities in Pakistan, including in Abottabad and Islamabad but was told that I was not eligible enough to get enrolled,”

He said that later he looked for online courses which were being offered by universities like Stanford and Harvard and he took online courses from here and now in 2021, he won the “Young Scientist Award 2021’ in America.