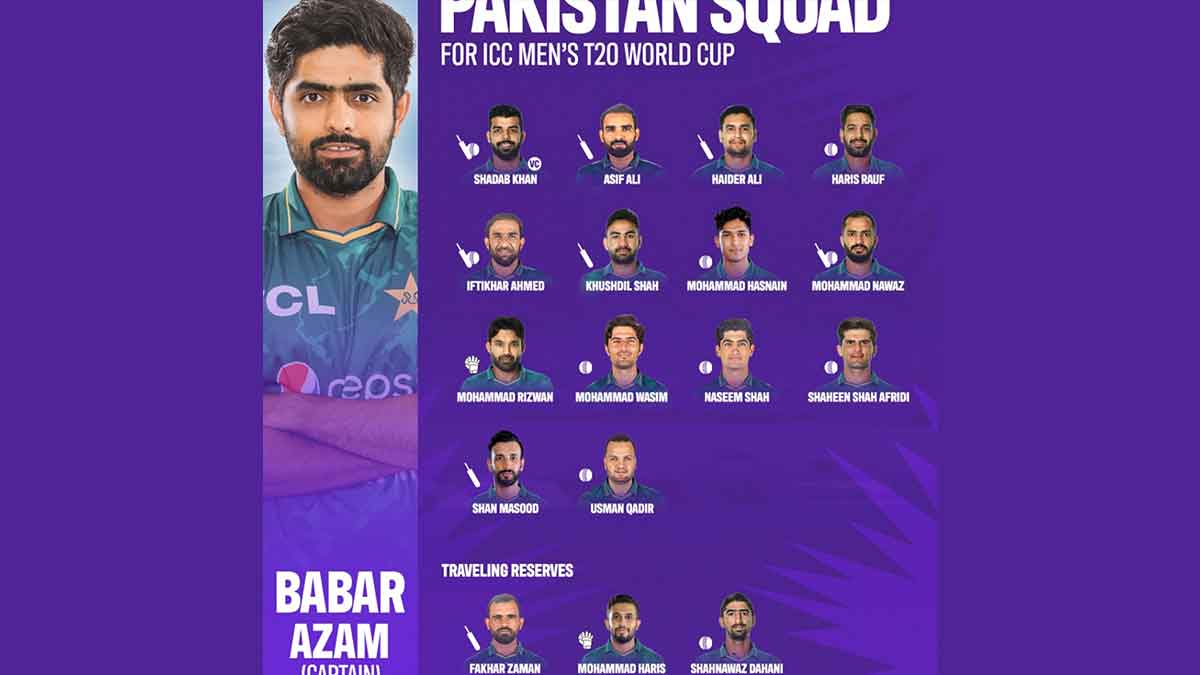 Pakistan’s squad for the ICC Men’s T20 World Cup Australia 2022, which will take place from October 16 to November 13, was unveiled by Chief Selector Mohammad Waseem.

Pakistan has been one of the most successful performers to date, having won the tournament in 2009 in the United Kingdom, reached to the final in 2007, and participated in the semifinals in 2010, 2012, and 2021.

Along with fast bowlers Mohammad Wasim Junior and Shaheen Shah Afridi, top-order batsman Shan Masood has been selected for the 15-player World Cup team for the first time, while the three travelling reserves are Fakhar Zaman, Mohammad Haris, and Shahnawaz Dahani.

Wasim Junior was added to the team after fully recovering from the side injury he sustained during the ACC T20 Asia Cup, but Shaheen, who is in London receiving treatment for a knee issue and will likely start bowling again early next month, will join the team in Brisbane on October 15.

Pakistan’s World Cup team for men’s T20: (Changes to the squad may be made up until October 15 without the Event Technical Committee’s agreement.)

The World Cup-bound team will compete in the T20I tri-series in Christchurch from October 7–14 with Bangladesh and New Zealand as the other competing teams before their arrival in Brisbane on October 15.

We have a team that can do well at the ICC Men’s T20 World Cup 2022, according to chief selector Muhammad Wasim. Since practically the same group of players has been a part of the T20I squad following the 2021 World Cup in the UAE, we have showed faith and confidence in them.

We have won nine out of our previous 13 T20Is because these players have performed well since November 2021. We have invested in these cricketers; therefore, it is only fair that they receive the chance to prove themselves in the World Cup, an event for which they have been hard at work in training. Shaheen Shah Afridi is expected to start bowling again early next month, according to reports.

With the exception of Fakhar Zaman and Shaheen Shah Afridi, all of the players who will travel for the World Cup have been picked for the seven-match T20I series against England.

According to their strategy to reward good players, the selectors have swapped them with Northern’s all-rounder Aamir Jamal and Sindh’s enigmatic spinner Abrar Ahmed.

Muhammad Wasim added, “I want to congratulate Aamir Jamal and Abrar Ahmed for receiving their first calls to the national team. Both Aamir and Abrar have been chosen because we think they have what it takes to represent Pakistan at the highest level, and I have faith that they’ll deliver if given the chance. Additionally, Fakhar Zaman has been given a break from the England T20Is so that he may heal from the knee injury he suffered in the final when he landed awkwardly while fielding.

27 October – vs winner Group B, Perth

30 October – vs runner-up Group A, Perth