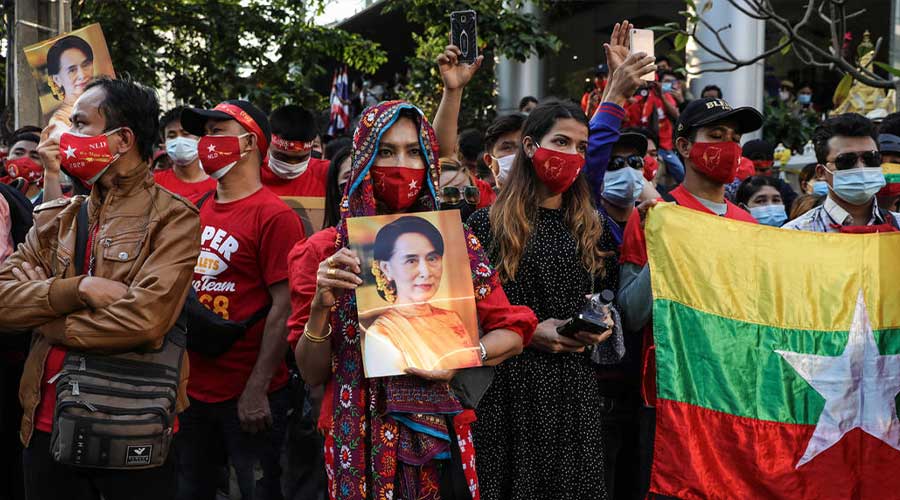 Elected Myanmar leader and Nobel laureate Aung San Suu Kyi’s government was overthrown by the military after she was detained in early morning raids along with other leaders of National League for Democracy (NLD) party.

According to an official statement on a military backed television station, the armed forces said it had carried out the arrests in response to ‘election fraud,’ handing power to military chief Min Aung Hlaing and enforcing a state of emergency for one year.

Phone lines to the capital Naypyitaw and Yangon’s main commercial center were not available, and state television went off air hours before parliament was due to sit for the first time since victory of the NLD in November election.

In the early hours of the morning, NLD spokesman Myo Nyunt revealed that, Suu Kyi, Myanmar President Win Myint and other NLD leaders were “taken”.

The arrests came after days of mounting strain between the civilian government and the military that, in the aftermath of the election, stimulated fears of a coup.

The White House reported that President Joe Biden had been briefed on Suu Kyi’s detention.

“The United States is opposed to any effort to change the results of recent elections or obstruct the democratic transition of Myanmar, and will take action against those responsible if these measures are not reversed”, said Speaker Jen Psaki in a statement.

The Australian government said it was “deeply concerned at reports the Myanmar military is once again seeking to seize control of Myanmar” and called for the immediate release of the leaders who were illegally detained.

Japan said it was monitoring the situation and had no plans to repatriate Myanmar’s Japanese nationals at present.