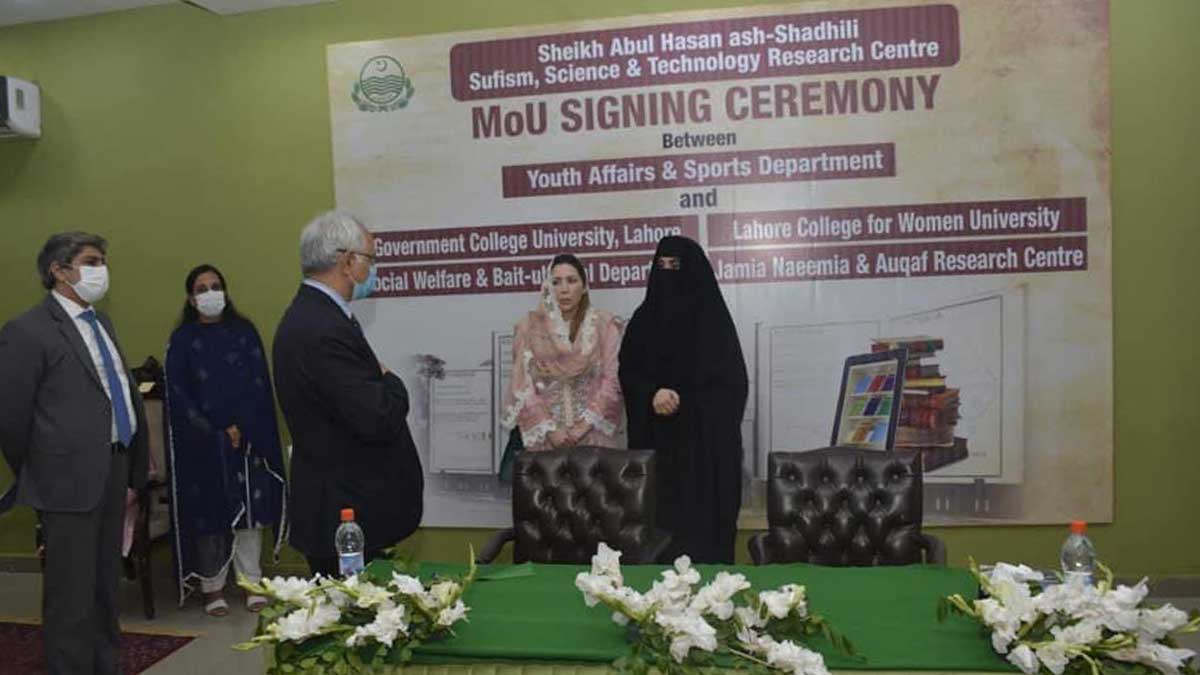 Bushra Imran, the First Lady of Pakistan and wife of Prime Minister of Pakistan Imran Khan, inaugurated the Shaikh Abul Hasan ash-Shadhili Research Hub and Library for promotion of Sufism, science and technology at the Punjab Sports Board (PSB) E-Library building at Nishter Park Sports Complex.

The name of the center has been declared after Sufi scholar Sheikh Abul Hasan ash-Shadhili, who hailed from a royal family of Morocco and served in the fields of Islam and Sufism throughout his life. He also founded the Shadhili Sufi Order.

On the first lady’s initiative, Punjab will now have the research hubs in the province that will conduct research on Sufism and science and technology.

Moreover, in the first phase, Sheikh Abul Hasan ash-Shadhili research hub would be established in Lahore for research on Islam, Sufism, religious thought, interfaith harmony, and modern sciences besides S&T.

Under the Bushra Imran’s vision, the sufism science and tech research centres would be expanded across the province.

The oppressed segment of the society would be given equal opportunities to progress under the poor-friendly and pro-education initiatives of the wife of Prime Minister Imran Khan.

Sheikh Abul Hasan ash-Shadhili Research Centre would serve the poor students and those ardent about getting an education. The centre would be connected with the shelter homes, child protection bureaus, prisons, particularly women and juvenile jails, schools, colleges, universities, public, private, and religious educational institutions.

It would also be associated with the libraries of world-famed research centers like JSTOR, Oxford and Cambridge, would be made remotely reachable across the province. The portal and counters would also be established to guide the students at the research centre for getting admission in local and foreign universities, in cooperation with the Higher Education Commission.

In this regard, the MoUs are being signed with the Government College University, Lahore College for Women University, Jamia Naeemia and Auqaf research centers for linkage with the Abul Hassan Center.

Bachelors, M. Phil and Ph.D. programs on Islamic philosophy, Sufism and science will also be introduced in the centers. Whereas, the Rahmatullil Alameen Scholarship would also be made part of it.