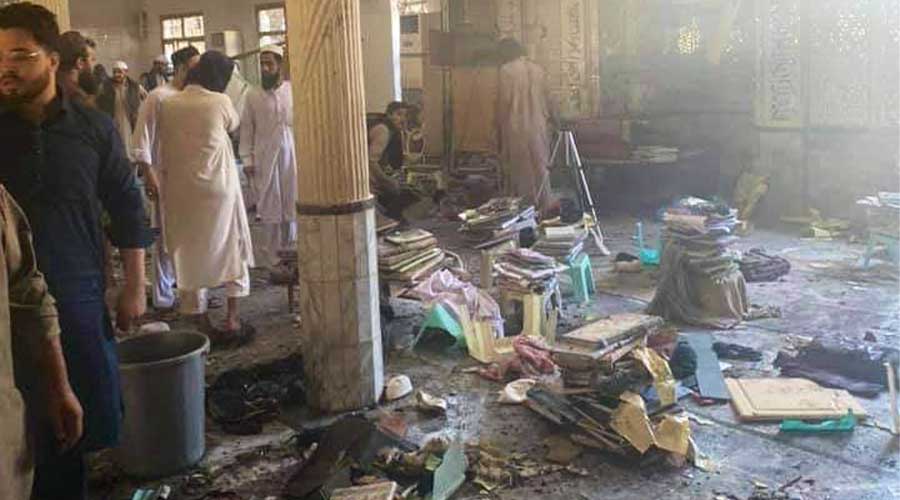 At least ten people were killed and more than 70 injured after an explosive device in a bag detonated on Tuesday morning at the Jamia Zuberia madrassa in Peshawar Dir Colony.

Police sources reveal that around 40-50 children were present inside the madrassa when the bomb went off.

The seminary’s administration said around 1,100 students study at the institution and added that students between the ages of 22 and 28 were present in the class at the time of the explosion.

SP City Peshawar Waqar Azeem told media that an unidentified man entered the madrassa around 8am and left a suspicious school bag in the premises.

He said the bag is believed to have had an IED device that went off when the children started filling in the seminary.

Rescue 1122 arrived at the scene and shifted the victims to the Lady Reading Hospital.

The prime minister in his tweet expressed grief over loss of lives and prayed for the speedy recovery of the injured.

“I want to assure my nation we will ensure the terrorists responsible for this cowardly barbaric attack are brought to justice asap,” Khan posted on Twitter.

Deeply saddened by terrorist attack on madrassah in Peshawar. My condolences go to the victims families & prayers for early recovery of the injured. I want to assure my nation we will ensure the terrorists responsible for this cowardly barbaric attack are brought to justice asap