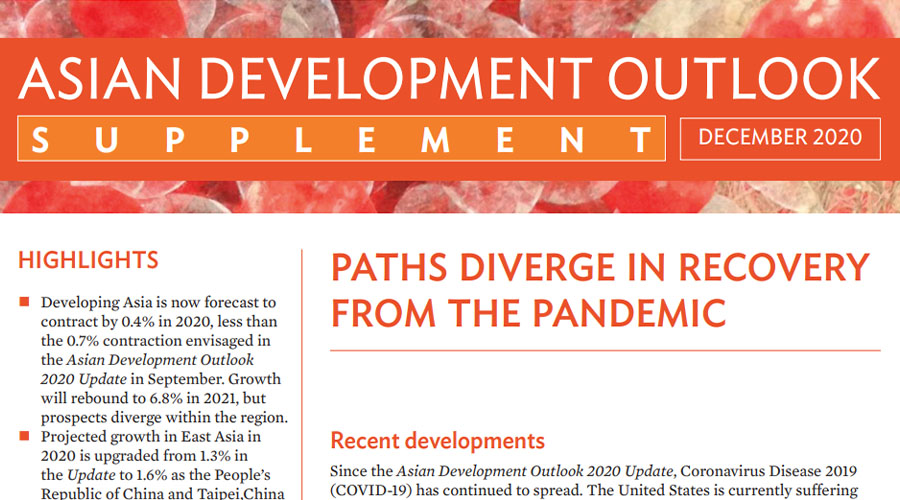 The Asian Development Bank (ADB) has said that the economy of Pakistan was on the path of recovery, economic activity in South Asia had started to normalize from the third quarter.

According to the brief Asian Development Outlook Supplement report released by ADB on Thursday, “Pakistan’s economy is recovering, particularly in the manufacturing and construction sectors, supported by the government emergency relief.”

The report by the bank forecast the developing Asian growth to rebound to 6.8% in 2021. The report is called Asian Development Outlook 2020 Supplement: Paths Diverge in Recovery from the Pandemic. The report discussed the largest economies of its member states but did not include a number on Pakistan’s growth projection.

Moreover, based on the output numbers of the agriculture and industrial sectors, the internal working of the Ministry of Finance suggested that the country may achieve 2.6% to 2.8% economic growth this fiscal year.

According to the sources, the work by Pakistani authorities indicated that the agriculture sector that was targeted to grow by 2.8% may achieve a 3% growth rate due to better output in sugarcane, maize, rice, and wheat crops.

In Afghanistan, agriculture is robust, but the outlook is adversely affected by a new Covid-19 wave and intensified conflict even as peace talks continue.

Whereas, In Bhutan, the impact of Covid-19 is now expected to be greater than projected in the update after a nationwide lockdown in August and September halted all economic activity.