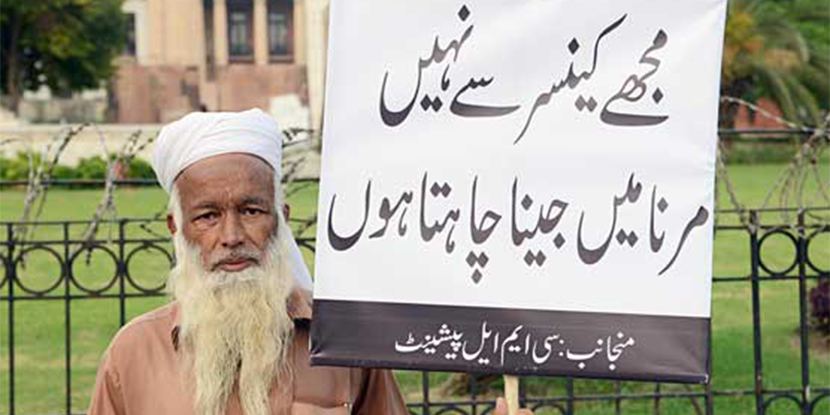 According to the statistics done by experts regarding the prevalence of cancer in Pakistan, just last year 150,000 new cancer cases were diagnosed and 120,000 cancer-related deaths occurred.

Cancer is a big problem in Pakistan. Around 23 percent of the country’s population suffers from different types of cancers. Mainly among them are skin cancer, blood cancer, brain tumor, prostate cancer and, specifically breast cancer which is very common these days.

Pakistan is a poor country where diseases are many and each disease affects thousands. The prevalence of some common diseases is due to millions of impoverished people. The poverty-stricken population does not have enough resources to treat their diseases. Environmental pollution and poor food consumption are other big issues that cause different types of diseases that are when not treated, becomes severe and with a dying healthcare structure, they are not treatable.

Cancer is the most emerging disease of all diseases in Pakistan. Almost lacs of people are diagnosed with cancer annually. The country being a developing country does not have enough resources to get everyone treated. Unfortunately, Pakistan does not produce any cancer treating medicine in the country and popular medicine is imported from other countries which makes the cure and control very expensive. The locally produced inexpensive medicine is only to give them relief and control it somehow.

A brain tumor is one of the prevalent cancerous diseases and many brain tumor cases remain untreated in the country because of the few numbers of neurosurgeons. The hospital that has the facility to treat brain tumors is either very few or charge very high which makes the treatment unaffordable by millions of people. The ones who can afford are the ones who come to know the tumor development at the later stage when doctors cannot even perform removal surgery and therefore their disease becomes severe and many die.

Treatment of any cancer depends on the type of cancer and the person’s age. In the treatment, high energy radiation is used to kill cancer cells. Quicker is the treatment, the quicker is remission.