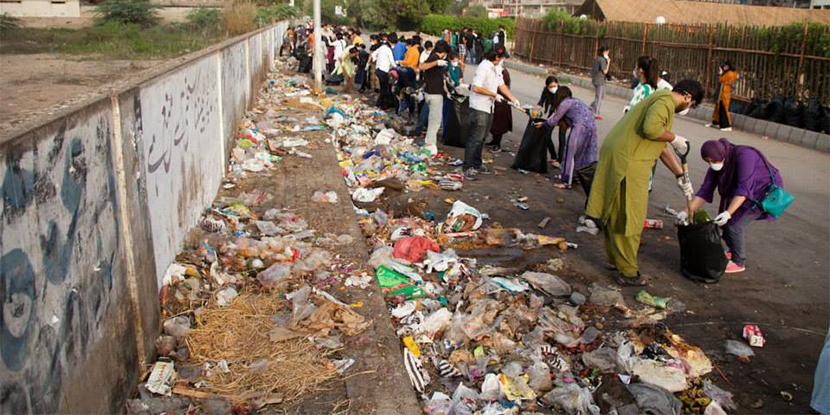 Karachi is among the biggest cities in the world and comes on the 8th number. It is well-developed and has large industries. It has a population of approximately 20 million people. Unfortunately, it is among the most 5 polluted cities worldwide. Too much mismanagement has lead to the situation where authorities have given-up their part of responsibilities and nobody is there to maintain the cleanliness of the city.

Many people in the last few years moved to Karachi for the sake of jobs and they settled there along with their families. This caused an increase in the population of the city. Pakistan is already facing many problems like political instability, poverty, and mismanagement. Pollution is now also becoming a big problem due to climate change and global warming.

Cleanliness and steps to counter pollution are important for us because every year in Pakistan around 26,000 people die due to environmental pollution. Many industries in Karachi produce tons of toxic polluted gases and pollutants every day; the garbage is dumped and the toxic chemicals are released to the river nearby. Some of the garbage is then picked out by garbage collectors which are recycled and most of the solid waste is left behind. The left material produces pollution that contains disposable material. On the other hand, toxic gases released produce air pollution which then creates breathing diseases. The river water containing toxic chemicals that are used for many purposes produces water pollution and becomes hazardous. This produces many water-borne diseases.

Due to rising pollution in Karachi, streets are piled up with garbage that is left on the streets by people and industries, which is a big reason for environmental pollution. Environmental pollution due to garbage is the cause of many cancerous diseases. Similarly, noise pollution caused by transport, traffic, loudspeakers, and mechanical workshop activities is responsible for issues like depression, headache and blood pressure.

Air pollution is increasing day by day in Karachi. The toxic gases released in the air and the heavy smoke emitted by bikes, buses and many other vehicles are resulting in many serious diseases like lung cancer, bronchitis, and skin ailments, etc.

rising pollution in Karachi has adverse effects on the health of people. Streets are full of garbage. Gutters are overflowing and choked with plastic materials and pipes are leaking which is causing water-borne diseases.

Water pollution in Karachi; Pakistan is 83.45 and water quality is 16.55. Air pollution is 79.01 while quality is 20.99. Noise and light pollution is 68.20. dirt and untidiness are 77.96 whereas cleanliness and tidiness are 22.33. Local government and municipal authorities are slow in the implementation of steps to control the menace of pollution. It is affecting the lives of common citizens. If this garbage is collected and categorized separately, 80 percent of garbage can be recycled. New policies should be made and properly implemented to permanently clean the areas and grow more trees to counter air pollution.

What kind of pollution is worst for your health?

Overall, the largest single environmental health concern in the world is air pollution, which kills about 7 million people year or results in a global mean loss of life expectancy (LLE) of 2.9 years.