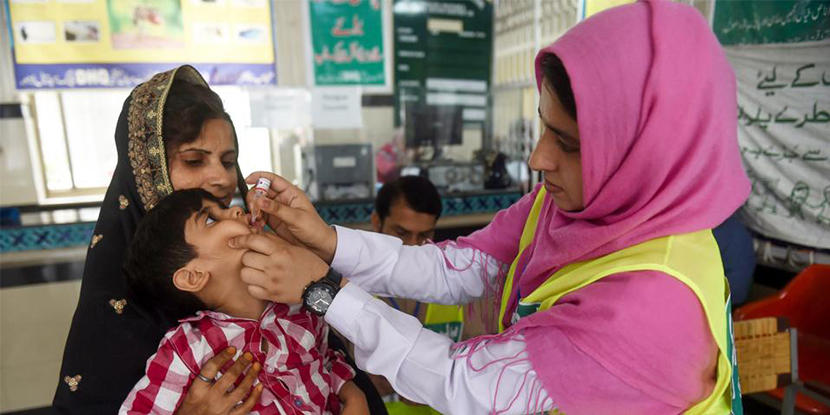 Pakistan is among the only three countries where polio remains endemic, others being Afghanistan and Nigeria. Due to the extensive eradication efforts of the country, polio cases in Pakistan have declined to only 8-10 people a year.

This endemic of poliovirus is not even close to being completely eradicated. This is unfortunate for Pakistan that in this current advanced age, the country is included in those only 3 countries where poliovirus is spreading.

Pakistan has made great efforts to completely get rid of the poliovirus and these efforts have shown great results. But there are still new cases coming from some of the areas of the country. In 2018, in Bana Manji Wala village near Lakki Marwat a 16 years old girl had a paralysis stroke. When her specimen was collected, it was found that she is affected by poliovirus. Her mother claimed that her child was suffering from high fever and infection in the respiratory tract when they consulted doctors and within two weeks the symptoms of paralysis were found. Fortunately, the timely treatment of the child was started and she started playing normally and came back to the normal routine of life.

Another case was reported in KPK of a 25 months child who was infected severely by poliovirus. The child’s lower limbs were paralyzed. After investigation, it was discovered that the child did not receive a single dose of vaccine during immunization campaigns.

In 2019, in Sindh province’s Thatta district, Mirpursakro tehsil, a child of 34 months was so badly affected by poliovirus that the toddler’s upper and lower left limb were paralyzed. Unfortunately, the child was not properly treated because of poverty and the absence of healthcare centers.

In 2018, the polio cases in Pakistan increased to 135 cases in 2019 and as of now, 23 cases have been reported in 2020 till March. This means polio is still a big issue and the numbers are increasing instead of declining. In 2019, 91 polio cases were received from KPK, 8 from Punjab, 25 from Sindh and 11 from Baluchistan.

This disease affects less than five years of children and once a child is affected by it, no remedy is useful except to give the vaccination. The government regularly runs public awareness campaigns and go to each home in the affected areas to give free drops to children who are less than 5 years of age. This is bringing a great change and soon the country will be free of this endemic. Vaccination is helpful to keep the virus away and it is the responsibility of parents to make sure their kids are properly vaccinated and given oral polio vaccine drops.

Wild poliovirus cases in provinces from 2018 to onwards are:

Polio this week in Pakistan

WHO’s International Travel and Health recommends that all travellers to polio-affected areas be fully vaccinated against polio. Residents (and visitors for more than 4 weeks) from infected areas should receive an additional dose of OPV or inactivated polio vaccine (IPV) within 4 weeks to 12 months of travel. (Data taken from WHO).