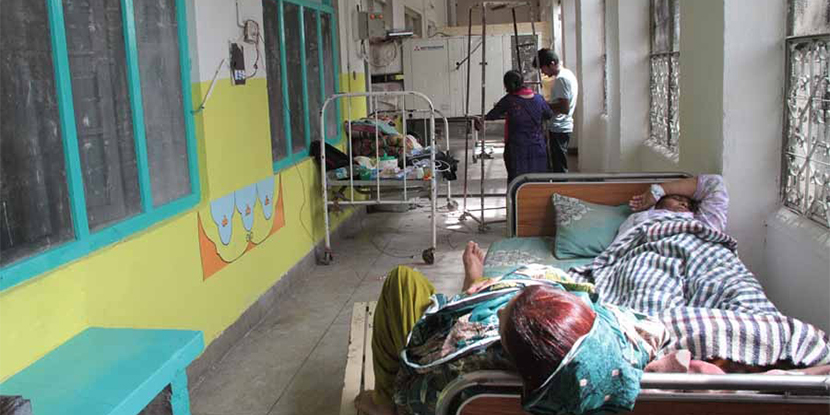 Poverty is a great disruption in a poor’s life. Poverty has no perks to it and when a poor get sick he will go to a government hospital not out of choice but because of no choice. The treatment charges in public hospitals are cheap, the medicine in many instances is free and they are accessible because every tehsil and district has the main healthcare center. On the other hand, poor management and lack of facilities in government hospitals is staggering.

Poor who cannot afford private hospitals where proper treatment is given therefore opt to government hospitals for the treatment. Unfortunately, the conditions in most of the government hospitals in rural areas are miserable and on top of that they are poorly maintained, they are unhygienic and they lack some of the basic healthcare facilities.

Most of the OPD departments are being run by the house job doctors who come to gain experience but they are given the duty of an experienced and highly qualified doctor. Such doctors are not even questioned about their absence. These government doctors prefer their private hospitals in working hours and seldomly come to the government hospitals. Moreover, when they serve, they look down upon the poor and keep a resentful behavior towards the patients. According to the survey in a rural area, people said that doctors are least concerned with their duties and they were not serious even when a patient was on death bed.

In 2019, students protested against the lack of facilities in District Headquarters Hospital (DHQ) near Peshawar Club where they demanded the provision of proper health facilities and put an end to other issues regarding healthcare in the hospital.

The appointment system was also noted to be rigged in many government hospitals. People who have some reference, they were treated with the utmost respect and proper facilities were provided to them. And local villagers had no such privileges. Although it is everyone’s right to get fine treatment, unfortunately, whoever has no intercession cannot have proper treatment.

Local villagers have to go through the long tiresome process of first standing in queues to get the checkup slip. Afterward, they were told to sit for hours to wait for their turn. In case, the doctor’s duty hours finish then the people waiting for many hours will have to return home empty-handed. Whosoever pays extra, they are checked with delay. This is all due to mismanagement and relaxation by the provincial government.

Another mischievous act in government hospitals is that they have started selling medicines. Even the one which is to be given free of charge. Although, the shortage of medicines is another big discussion. Normally government hospital doctors recommend their patients the medicines that are easily available and are mostly low in price but some greedy doctors recommend the expensive private pharmacies medicines that they get a commission for.

Lack of instruments and basic healthcare machinery is another big issue. Every hospital is equipped with basic healthcare facilities but due to corruption and malpractices, the hospital staff sell them and distribute the money among themselves. Due to these problems, hospitals have a shortage of even beds and chairs.

Every year, hundreds and thousands of poor people from rural areas die due to the mismanagement and lack of basic health facilities in hospitals.