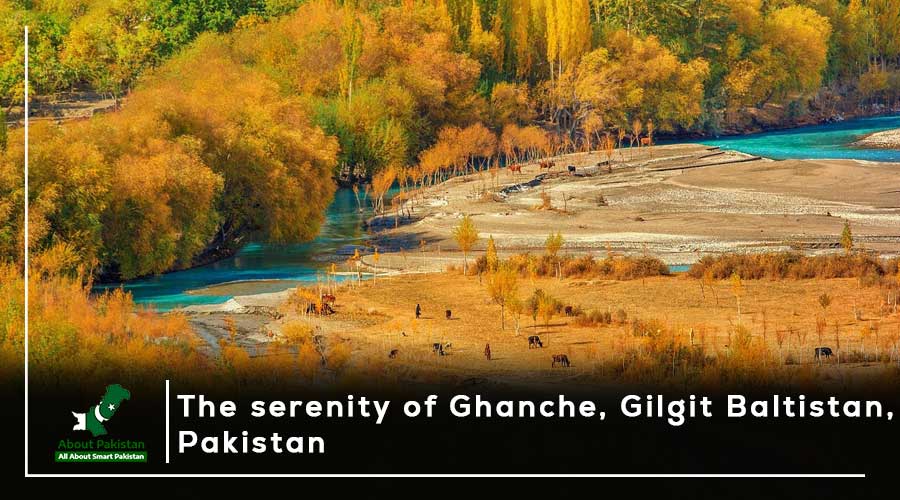 Gilgit-Baltistan’s easternmost Ghanche district has some of the most beautiful valleys populated with the most hospitable locals. It is rich with many rivers. Its central location is Khaplu. Khaplu is a mesmerizing landscape with very high summits where blue waters and waterfalls are its beauty. People of this area on the bank of the river Shyok are highly warm and adoring.

While leaving Skardu, a narrow paved road with many trees lines up on both sides provides a peaceful and calming shade for the travelers.

The majority of the people here are Muslims and 90 percent of them belong to Noorbakshi Sufism Islam. However, the rest of the 10 percent are Shia and Sunni Muslims. Bowa Johar was a famous Balti poet and was a religious leader who has an important role in the region. Furthermore, boiled potatoes, milk, lassi, Yaks, are the most famous cuisine of this district.

After crossing the bridge at River Indus comes Ghanche. The addition in the landscape of Ghanche is the River Shyok. It is called River of death in the local language. This river is originated from Rimu Glacier in Ladakh which enters Gilgit-Baltistan from Machlu that is a village in Ghanche.

There is a wooden bridge on River Shyok on the left side of the path to Saltoro valley. The Saltoro mountain range stands like a wall and mountaineers take this path to Mashabrum. There is an orchard near Kahaplu and forests. It is the coldest area in northern areas where the temperature gets dropped down to -20 degrees Celsius.

This entire region was under the control of Buddhism and their leftovers can be found and seen engraved on old stones. Syed Nasir al-Tusi and Syed Ali al-Tusi arrived in Khaplu from Yarkand through Saltoro and preached Islam in this region in 1570. Raja Daulat Ali Khan of Khaplu built this fort Khaplu in 1840. The Yabgu family ruled this area for 700 years. This fort/palace has now been turned into Serena Hotel. There is a very old mosque beside River Shyok that is completely made of wood.