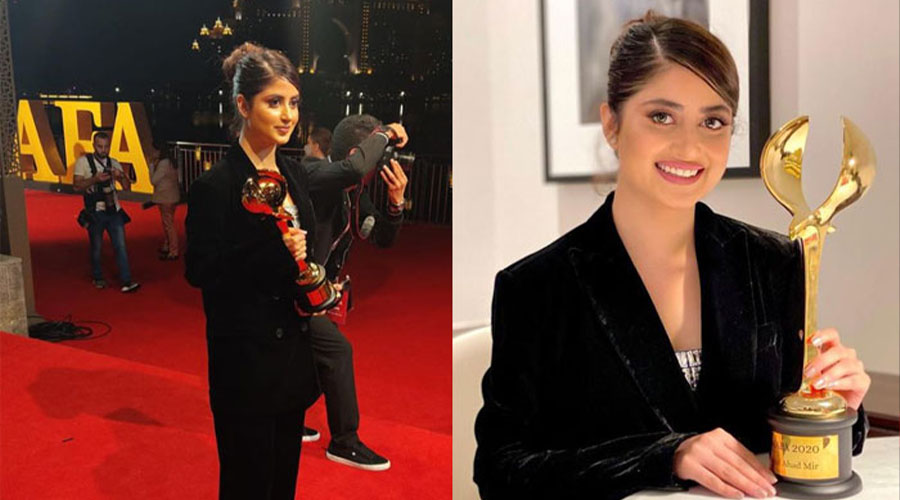 Leading Pakistani actress Sajal Aly was awarded for her contribution to film and television by the Distinctive International Arab Festivals Awards (DIAFA).

The 4th edition of the DIAFA show event happened last weekend in Dubai when the actress Sajal Aly looked mesmerizing in her black suit. She became the first Pakistani actress to receive this award and her fans are overwhelmed by her success.

She was interviewed after the award show when she said, “Sometimes, I am just overwhelmed by my fans. I wonder if they truly are for real. After the DIAFA’s, I checked social media and there was such an outpouring of love from them. Different publications were writing about my award but more than anything else, my fans were so happy that they made the news even more of a big deal for me.”

She continued, “I have never believed in especially publicizing myself on social media or getting my PR to put news about me in the headlines. I have always felt that my job is to do my work well and give it my best and if people like it, it will take me places without me having to emphasize on it. So it’s very special to me when I attend an international awards ceremony and all on its own, people get excited and start spreading the news.”

She was then asked whether she was confused on stage to receive the DIAFA award, “I get nervous very often,” Sajal Aly confessed.

“Regardless of how confident I may be about my work, when the spotlight is on me and I am about to step on stage my heart starts hammering loudly. Even otherwise, when I get praised, I sometimes get flustered or just find it unbelievable.”

Her outfit was the most gossiped discussion on social media and finally she was asked whether it was a designer’s or not? “It was from my own wardrobe and no, it wasn’t designer wear. I decided to wear something simple, something that I could wear again and again.” she said.