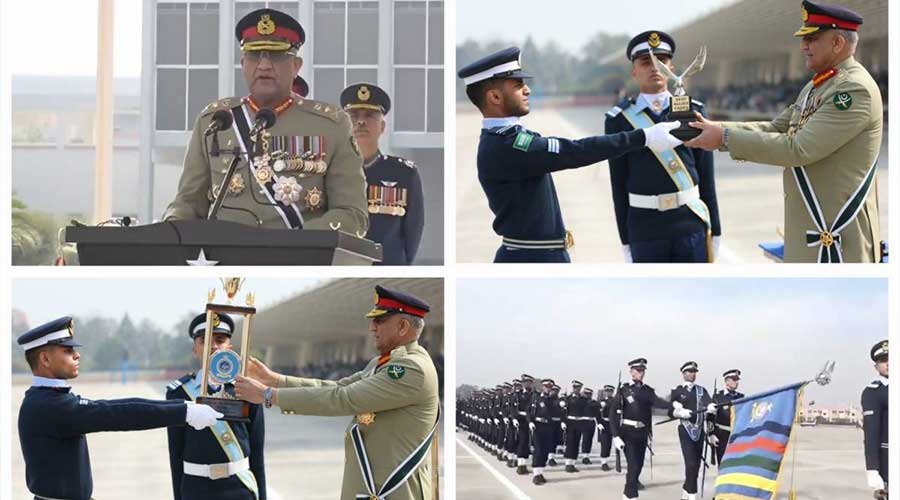 Chief of Army Staff (COAS) General Qamar Javed Bajwa said on Tuesday that Pakistan and India must settle the longstanding problem of Kashmir through diplomatic method, said Inter-Services Public Relations in a statement.

The army chief said today at the graduation ceremony of the 144th GDP, 90th Engineering Course and 100th AD courses held at Pakistan Air Force Academy Asghar Khan, Risalpur, that the Kashmir matter must be fixed according to the objectives of the Jammu and Kashmir people.

ISPR quotes Gen Qamar as saying that Pakistan is a nation that loves peace, has made great sacrifices for international, global peace, and is strongly devoted to the ideal of mutual respect and peaceful coexistence.

The chief of the army said that Pakistan’s Armed Forces are completely capable and ready to topple any threat, adding that Pakistan’s willingness for stability should not be misunderstood as its weakness.

The COAS General Bajwa praised the crucial role played by the Pakistan Air Force in the war on terror, according to the Army Media Wing.

The COAS presented the graduating officers with branch insignias and also gave the award winners trophies, the ISPR added.

A total of 133 graduating cadets graduated on the occasion, including 11 Royal Saudi Air Force Cadets and 6 lady cadets.