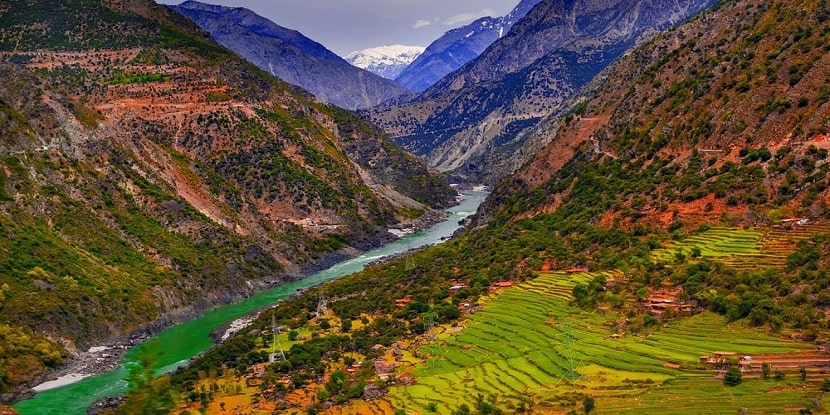 Pakistan is nonetheless blessed with natural resources. Rivers are one of them. The river system of the country is originated from the snow-covered Karakoram and Himalayan range. The country has one of the most significant rivers in all of South Asia. The system of water supply for irrigation schemes is based on two-third of the water that is supplied to homes all over the country is from Indus River and its tributaries.

Being the 3rd largest agricultural economy in the whole world, Pakistan’s rivers are the most important sources of water that are used in agriculture for all domestic usage and in the irrigation system. This system constitutes five rivers that pass through the Punjab province; Ravi, Jhelum, Sutlej, Indus and, Chenab.

The Jhelum river passes through the Jhelum District. This river was used to be called “Vitasta”, mentioned in the holy scriptures of the Indo-Aryans, the Rigveda.

It is 774 km long which is the tributary of River Chenab. It flows through Srinagar before entering Pakistan. Then it meets Neelam River, the largest tributary near Muzaffarabad. It has many dams built in it, especially the Mangla dam, which is the world’s largest dam that was constructed in 1967. Mangla dam has a capacity of 5.9 million acre-feet. Many barrages; like Rasool barrage, is also part of it.

Chenab river is 960 km long. It is formed when the Bhaga and Chandra river meets in the Himalayas. It flows through Jammu and Kashmir. This river was used to be called Acesines to the ancient Greeks.

The Indian government took steps to build several hyperpowers dams along with the Baglihar Hyde power project. But this plan was rejected by Pakistan, according to which, “India is breaking the terms and clauses of the Indus water treaty by storing and challenging the waters of the rivers”. Indian government completely rejected to accept this claim.

It is the most river amongst all rivers in Pakistan and also an important river in the Indian subcontinent. The Indus river’s total length is 3200 km. This river consists of a drainage area that exceeds 1,165,000 sq km. It has an annual flow of an estimated 207 cubic km. This river provides water resources for the ecosystem of the country. Many heavy industries are supported by it and it is the main supplier of the water in the country.

This river is the longest of all the rivers in Pakistan. It crosses through the Punjab northern India and Pakistan, the historic crossed region. It is 550 km long that is also called the red river.

This river is 720 km long. This is one of the major and important rivers in Pakistan. Ravi river was used to known as Parushani in India. It flows along the Indo-Pak border towards India under the Indus water treaty that is between Pakistan and India. This river is also called the Lahore river.