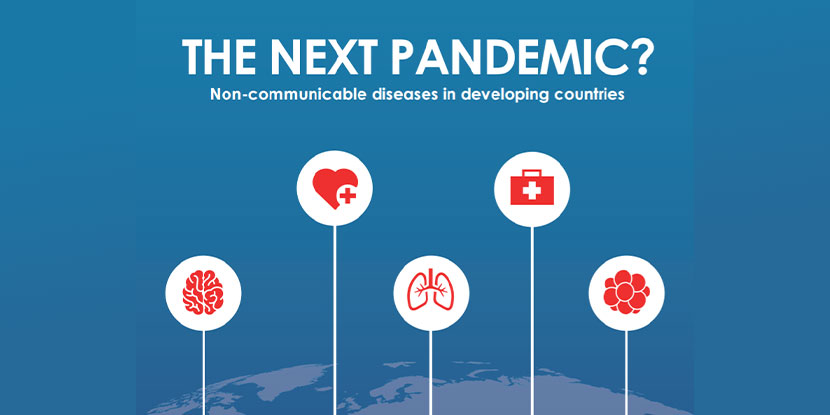 The diseases are among the top ten causes of high mortality and morbidity in Pakistan. About 77% of age standardizes deaths are caused by NCDs. Pakistan is the 6th most populated country in the world, out of which 2000 people die due to non-communicable diseases every day. Besides this, the disabilities that are reported due to the presence of those diseases are equally alarming.

These diseases are also known as chronic illnesses. There is an extensive list of non-communicable diseases such as hypertension, diabetes mellitus, stroke, any muscular illness, which tend to be of long duration and are caused by several factors like genetic, physiological, environmental and behavioral circumstances.

We can categorize the NCDs into two main classes; one being congenital and the other being acquired. Congenital NCDs are those which are inherited from parents before birth. For example, down’s syndrome, spina bifida, microcephaly, etc. This is the condition in which the genetic makeup of the newborn gets mutated. Down’s syndrome is not transferred from one person to another.

The acquired NCDs are those which are received from the surroundings. The surroundings can be internal or external to the body. Physiological changes occur when something goes wrong inside the body for example diseases of the immune system, Parkinson’s disease, chronic kidney disease, osteoarthritis, cardiac diseases, and stroke.

Acquired environmental NCDs are the ones that occur as a result of outdoor and household air pollution. The air pollution gives rise to chronic respiratory diseases such as lung cancer, chronic obstructive pulmonary diseases, and asthma. Some of the behavioral diseases caused by the acquired behavior of a person are obesity, postural problems, dehydration and heart diseases. Obesity is caused by adopting a sedentary lifestyle. Some postural related problems like the bamboo spine, forward head syndrome.

People of all countries, regions, and ages like children, adults and old ones are prone to non-communicable diseases. The older ones are more susceptible to these diseases. People of any age who eat unhealthy food, do not have a routine of physical activity, which smoke and use alcohol and other harmful chemicals are more prone to non-communicable diseases. The people who have any disease running in their families should be careful in their lives and should take precautionary measures beforehand.

The modifiable risk factors responsible for the NCDs are proper diet, healthy routine, cessation of smoke and alcohol. About millions of deaths occur around the world when people do not adopt a healthy lifestyle. There are some metabolic factors too which contribute to fatal diseases. These factors are raised blood pressure and blood sugar, elevated levels of cholesterol and obesity. The major chronic diseases which occur are cardiovascular disorders, neurological disorders, and hepatic disorders.