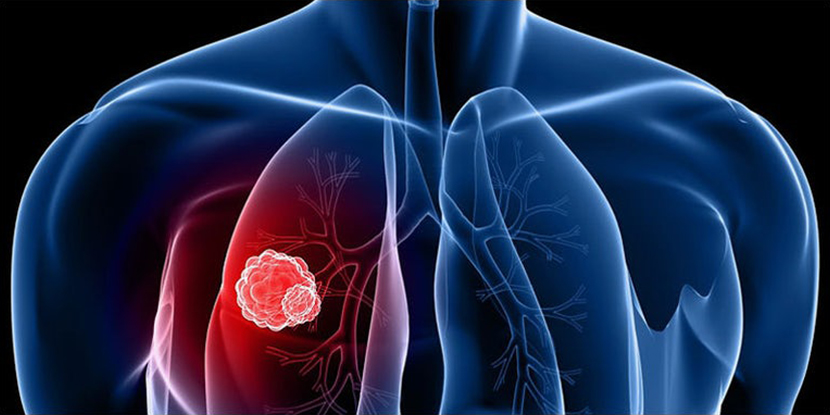 Lungs remove the carbon dioxide from the bloodstream and in this way fresh air or oxygen enters into the bloodstream. The major contribution of lungs involves the exchange of gases between the air that is inhaled and the blood. Lung cancer is the growth of abnormality of cells in the lungs.

Any part of the lung can be affected by cancer cells but ninety to ninety-five percent of cancer causes in the epithelial cells (the larger and smaller airways). Interruption of the system of check and balance on cell growth ensues in an uncontrolled division of cells that forms a tumor.

Lung cancer is the most common disease throughout the world. It is the second most prevalent disease due to which people die every year worldwide. Pakistan is one of the victims where thousands of people die of this cancer annually. This disease is predominantly a disease of elders. 70 percent of people above the age of 65 years are diagnosed with this disease every year, only 3 percent of lung cancers occur in people under the age of 45 years.

Just like some other types of cancer that are not disclosed at an early stage, lung cancer is one of them. If these symptoms are observed carefully, then the disease the body can be identified at an early stage. The symptoms in a person include losing weight, developing a frequent chest infection, unexplained headaches, chest pains, breath gets shortened, lingered cough and also wheeziness.

Smoking is the foremost cause of lung cancer. Smoking tobacco is prevalent in all ages pf people in almost every country. Many of them become chain smokers. 90 percent of lung cancer is formed due to the consumption of tobacco because tobacco contains 4,000 cancer-causing chemicals.

Air pollution, on the other hand, is another major cause of lung cancer. People live in polluted areas tend to develop asthma or lung cancers more than those who live in a pleasant environment. Undoubtedly, Pakistan is full of pollution where most of the cities are full of unclean air. Cleaning the environment is a must to have a healthy life but unfortunately, air pollution in the country is increasing day by day and people are developing lung diseases and lung cancer.

Lung cancer is transferable. People around like parents or siblings suffering from this cancer have more chances of developing it.

This is a curable disease. Its treatment depends on the stage of cancer, the health of a person and, cancer affected area in the lung. Some of the possible treatments include:

Surgery is the first solution to treat this cancer. Through treatment, cancer affected tissues are removed from the surrounding areas. In some severe cases, the surgeon may remove the lung entirely. A person can live a healthy life without the lungs if consume healthy food and stay fit.

Chemotherapy and radiations are the other way to treat it. The surgeon may use radiation or prefer chemotherapy (use of drugs) to eradicate fast-growing cancer cells.