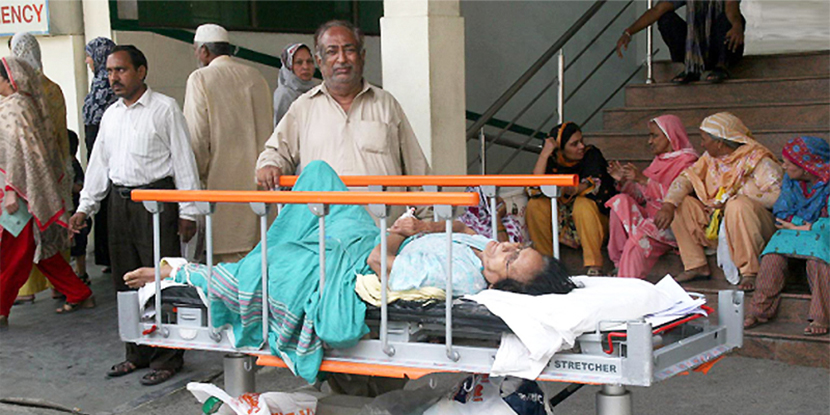 Lack of medicines in government hospitals is a common thing in Pakistan and thousands of deaths are caused due to the no availability of medicines.

24 percent of the population in Pakistan is desperately poor and many new are going below the poverty line every day due to inflation and unemployment. Unable to spend money on healthcare, government hospitals facilitates the poor by providing them with free medicine, but due to incompetence and corruption, the extremely poor section of society is deprived of this basic requirement of life. Every year, many of the poor people die due to the shortage of medicines in government hospitals.

The majority of the people cannot buy medicines from private hospitals and medical stores because they are too expensive and only the rich can buy them. People are promised to be provided with better healthcare facilities, free education, and free medicine, but they turn out to be just election sloganeering. In one instance, one of the doctors of government hospitals was interviewed where he stated that people are suffering from the acute shortage of medicines and most of the time they are asked to buy medicines and injections with their own money. Many of them die due to a lack of money and a shortage of medicines in hospitals.

Recent interactions with some disgruntled common men presented the depth of this widespread issue, one said, “we have nothing to treat ourselves with because we are poor and we are dying of it but rich people can easily treat themselves and they have an approach to all kind of medical facilities”. Another one said, “my child died due to the shortage of medicines in hospitals. I went to a pharmacy where I found that the prescribed medicine is way too expensive. I was not able to buy medicine for him and the next day my child died in the hospital”.

The issue is not limited to a specific region or province. The whole country is suffering and big renowned government hospitals like; Benazir Bhutto Hospital, Polyclinic Hospital, Holy Family Hospital, Sindh Government Hospital, Lyari General Hospital, and Public Welfare Hospital are among the hospitals that are always suffering from the shortage of medicines.

The higher authorities were unable to overcome the issue of shortage of medicines or medical facilities in public hospitals. The doctors make the most use of people’s suffering by recommending the patients to their own clinics where they charge the original price for the medicine.

Every year, more than 2 billion people die worldwide due to the lack of medicines in hospitals and Pakistan ranks high among those countries. Higher authorities are responsible for such negligence and failing to provide the poor with proper medical facilities.