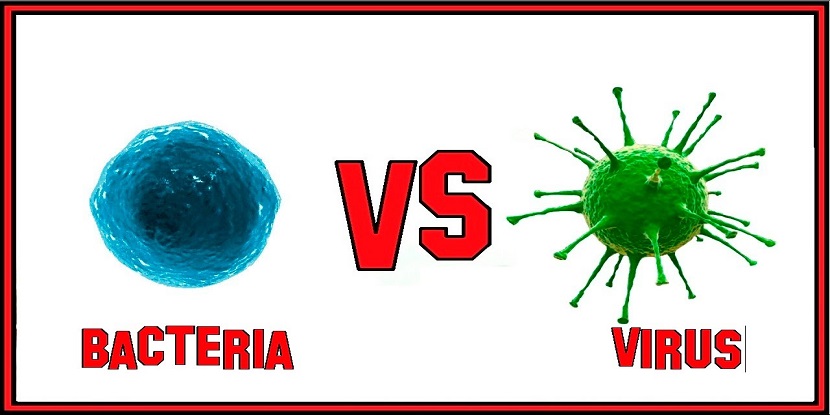 Both the virus and bacteria are the living microorganisms and they both are invisible to the naked eye, we need to use a microscope to study them.

Some bacteria are effective for humans and some cause infections inside the human body. Some types of bacteria can live in the hot and cold place while some live in the person’s intestine to help them in digestion and in fact, we have many bacteria inside our body which are very useful for the human being.

Bacteria are large in size and their size range is 900-1000nm. It has an asexual mode of reproduction. Most of the bacteria can reproduce without a host. Bacterial infections are localized and antibiotics are suggested to get rid of this infection.

On the other hand, the virus is extremely smaller than the bacteria size range is between 30-50nm and contains either RNA or DNA. The virus is not fully considered as a microorganism because it always needs a host to live in like human beings, plants and animals because it cannot survive outside the host.

The virus reproduces itself by hijacking a host’s cellular machinery and then copies itself. It needs a host to complete its reproduction process. Viral infections in humans are usually systemic and antiviral medicines are prescribed for the infections.

It can be very difficult to differentiate between the differences in symptoms of both the infections because both have almost similar symptoms. In order to find out any health issue we need to go to the doctor and after that doctor may take the sample of your urine, stool, and blood and then will identify under the observation of microscope.

Both infections treated differently and it is very important to treat them differently. Doctors use antibiotics to kill bacteria or to stop multiplying them in any case of bacterial infection, but antibiotics may cause antibiotic resistance that’s why it is only suggested in the case of serious infections.

As most of the virus can stay in the air until finding out any living organism so it is very difficult to fight with it, but for that doctors mostly suggest antiviral medicines to kill the virus.