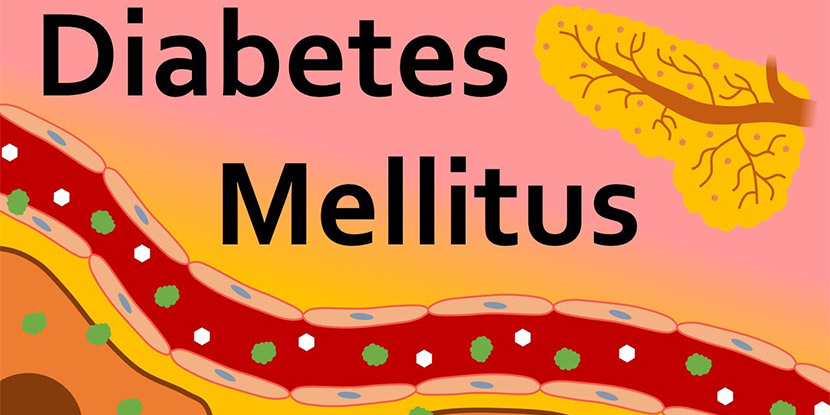 Diabetes Mellitus is a metabolic as well as an endocrinological disorder that causes retention of high glucose in the blood. In Pakistan, a common word used for this disease is ‘Sugar ‘as its name suggests. Diabetes refers to ‘to pass through’ and Mellitus meaning ‘sweetened with honey’. This disease has a striking feature of the passage of sugar through the urine of a diabetic patient. About 11.77% of Pakistan’s population is suffering from Diabetes Mellitus while males being more affected than females.

Insulin is a hormone produced in the pancreas that plays a key role in the regulation of the amount of glucose in the blood. If the insulin fails to do its function the result would be the increased glucose in the blood on the other hand if there is no or less production of the insulin the result would be Diabetes. The presence of both of these conditions can be simultaneous.

There are primarily two types of diabetes, type I also known as Insulin dependent diabetes mellitus in which pancreatic beta cells refrain from producing insulin and type II referred to as Non-Insulin dependent a condition in which the cells do not utilize the produced insulin. There is one more type of diabetes known as Gestational diabetes in which a non-diabetic female develops Diabetes during her gestation period i.e. pregnancy. In most of the females, diabetes gets cured as soon as childbirth occur but there remains a chance of getting diabetic in future life.

The most common signs and symptoms one can report are excessive urination and thirst, increased appetite, sudden weight loss, retinopathies, nephropathies, and several other peripheral neuropathies. As every cell of the body needs the energy to work, this energy comes from glucose, if the pancreas is not manufacturing insulin, the glucose produced after eating food cannot be uptaken by the cells and the blood glucose level will rise as a result unexplainable fatigue occurs in diabetic patients. There are a number of secondary medical issues that can be resulted in a diabetic patient, for example, diabetic foot.

Diabetes Mellitus requires a lot more care than any other disease as it can lead to various other serious medical and physical problems. The most important thing is to eat healthy and selective food that is free of gluten. After eating healthy one has to digest it properly through physical activity. Physical inactivity can cause obesity which then causes glucose levels to rise in the blood. Once one has been diagnosed with diabetes there is a lot of care to be taken with one’s extremities as diabetes causes peripheral neuropathies that can result in devastating injuries. Regular checkups, medications, and exercise can prove fruitful in coping up with diabetes.