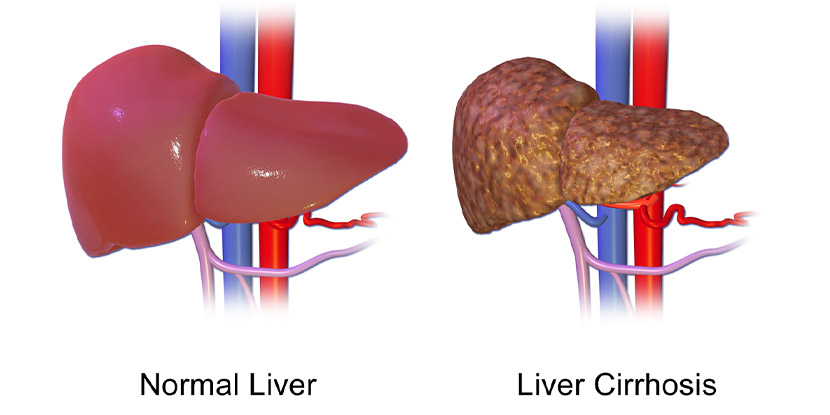 Cirrhosis can be described as a complication of several diseases of the liver characterized by abnormal structure and functioning of the liver. In Pakistan, researchers attribute the Hepatitis C Virus (HCV) as the predominant cause of cirrhosis. Pakistan ranks the 2nd highest place in having a chronic infection with more than ten million effected people living with HCV. In general, about 37.7 % of people are affected by cirrhosis in Pakistan.

The diseases that lead to cirrhosis include any damage to the liver that causes liver or hepatic cells to die, in compensation to the dead hepatic cells, scar tissue starts to generate. The liver has a special property of regenerating its cells on its own, keeping in view this feature, the liver cells which were alive, begin to multiply in an attempt to replace the dead cells. This then results in the accumulation of newly formed cells in the scar tissue that has been generated to heal the dead hepatic cells.

Cirrhosis itself is usually reported as a very late stage of liver damage. It starts as an inflammation of the liver, if not treated it leads to scarring or fibrosis. Till this stage, the disease can be controlled but if it is left untreated, it results in irreversible damage to the liver labeled as Cirrhosis. Cirrhosis has a further four stages. Each stage has its own characteristics according to the symptoms.

The common signs and symptoms a patient can experience are yellowing of the skin also known as jaundice, fatigue, loss of appetite that leads to weakness, itching. The liver has a lot of functions in our body, for example, production and channeling of the bile and blood regulation. In a diseased liver, these two functions get disturbed. The yellowing of the skin indicates that the bile is not getting out of the liver to be entered into the digestive system. While bruises start to form as the ill hepatic cells do not manufacture blood and blood clotting factors.

There are different causes of getting a cirrhotic liver. Certain chemicals are reported to cause damage to the liver such as fats, alcohol consumption and certain medications. The one important thing about taking medications is that they should never be used without prescription so that they do not harm you. A few viruses and accumulation of some toxic metals like iron and copper in the liver due to some genetic disorders can lead to liver cirrhosis. Another cause of the liver to get cirrhotic is an autoimmune disease, a condition in which the body’s immune system attacks the liver. This happens in a person who gets affected by hepatitis B or C infection quite often.

As cirrhosis is already the late stage of liver damage, it cannot be cured but controlled by treatment. The two main goals are kept in mind while treating the patient is to minimize further liver damage and to prevent complications. Some antiviral medications, a healthy diet, and refraining from toxic chemicals can be helpful in the treatment. In some late stages, doctors recommend a liver transplant which is now a very common and successful surgical procedure in Pakistan as well.