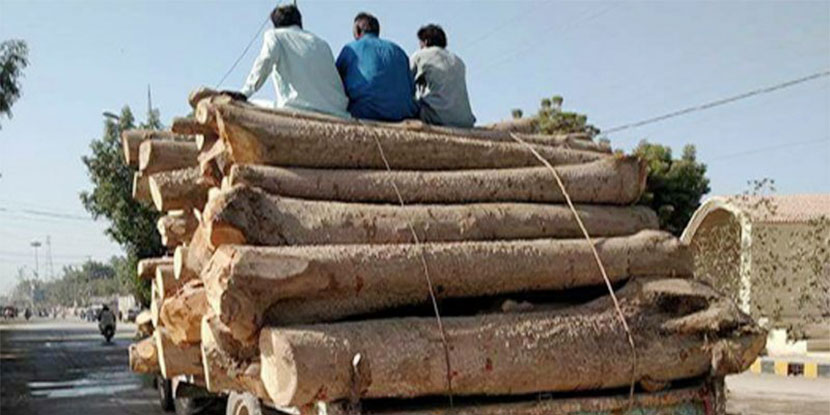 Karachi is the largest city in the country and also the most polluted city with overcrowded areas, industries, infrastructures, mills, and big factories making it the main metropolitan region of the country. The government tried to make the city highly advanced with technology and big infrastructure projects but at the expense of diminishing natural resources of the city like massive deforestation.

Trees were cut down mercilessly which lead to deforestation in the city which consequently lead to the spread of many diseases due to pollution. The lack of government’s environment friendly policies is the main reason Karachi is under the grip of multifarious pollutions.

Deforestation in Karachi has become a slow killer for the crores of residents of the city. It also destroyed the nature and climate of the city. It was the main reason behind land erosion and water erosion. Cutting down trees causes an increase in carbon dioxide in the atmosphere that harms the environment and living creatures like human beings, birds and animals, etc.

The massive deforestation increases the overall temperature and with each passing day, rainfalls are getting reduced and the weather is getting hotter. On the other side, industries and the construction of buildings further reduce the leftover trees in the city.

The release of smoke, chemicals, toxic gases, unhygienic particles, the smoke of buses, cars, or all vehicles, burning fire, and industrial emission is the source of land and air pollution in Karachi but these toxic emissions could be vanished out if the forests were there. Air is full of liquefied petroleum, carbon dioxide, sulphuric acid, chloro floro carbon, and nitrogen gas which is released from automobiles is extremely harmful to the human health.

Trees absorb such gases and play their role in providing fresh air into the environment. Unfortunately, this city is deprived of this natural blessing.

A few years back, due to the construction of the green line section for the Karachi metro bus transit network in Karachi, 17,000 trees were cut off in 26km portion from the areas of Surjani Town to Gurumandir. Moreover, the area between Sofoora Chowrangi and Hassan Square got deprived of approximately 12,000 trees for the project for expansion and rebuilding of the university road.

Then a few years later, a similar case happened when the project superhighway and national highway started, 4,000 trees sacrificed. Whereas, 12,000 trees were also cut down to expand the makeshift market near superhighway.