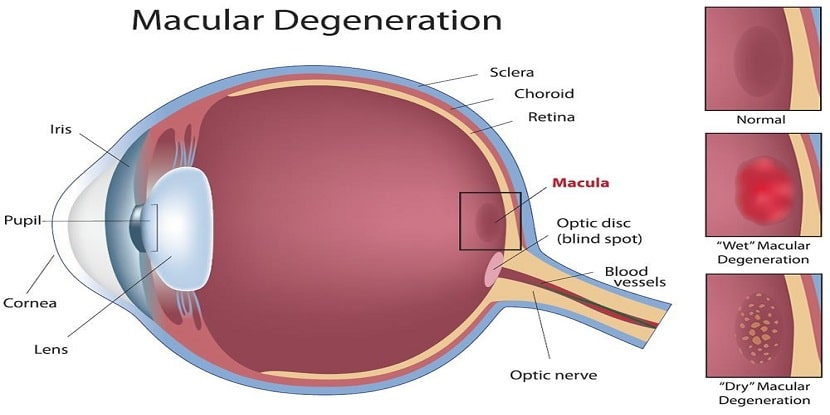 The functional unit of the retina is called macula. The retina is a tissue in the structure of the eye that is sensitive to light. It gives the ability to see 20/20 and provide the best color vision. The cone cells make up the macula, which is responsible for the color vision and sharp vision. If the cones get ruptured the vision becomes blurry and cloudy.

Macular degeneration also is known as age-related macular degeneration (AMD or ARMD) is a medical condition that may result in blurred or no vision. In Pakistan, about 2.1% to 8.7% of people suffer from AMD and is responsible for the complications of the eyes such as blindness.

The condition may lead from one eye involvement to both eyes. It may not lead to complete blindness, but the loss of central vision can be cause difficulty or disturbance in recognizing faces and other things that make it harder for the patient to perform daily activities of life. The visual symptoms that occur are distorted vision, in which the vision gets disturbed and the patient gets wavy or blank pictures.

Scotomas may also occur that cause shadows in the areas of vision. A patient’s vision may take more time than normal to recover when exposed to bright light. Macular degeneration may be slow or rapid. Patients with non-exudative degeneration initially find their disease asymptomatic but people with rapid or exudative degeneration show a quick onset of vision loss. Color differentiation gets abnormal in the patients for example, they are not able to discern colors of the same tone.

In AMD, yellow deposits called drusen accumulate in the macula. This damages the retina. Amyloid beta, a protein that accumulates in Alzheimer’s disease also builds up in AMD that is why AMD is sometimes called the Alzheimer’s of the eye. AMD can be divided into three stages based on the extent of drusen. The first stage called the early stage is usually asymptomatic and is diagnosed due to the presence of medium-sized drusen.

The second stage called the intermediate stage is also asymptomatic but may cause some loss of vision. It is diagnosed by the presence of large drusen or any abnormalities of retinal pigment. The third stage called the late AMD causes significant retinal damage. A large amount of drusen exists in late AMD. In addition to this, symptomatic vision loss also occurs. The damage due to late AMD can either result in the development of atrophy or onset of neovascular disease.