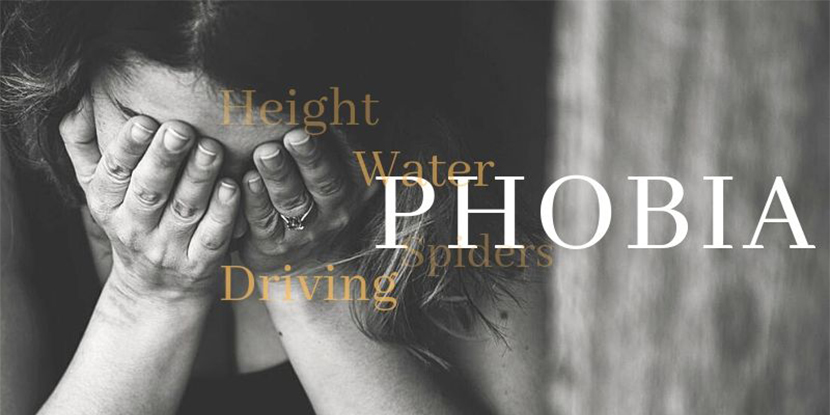 The experience of extreme fear of some living creature, a condition or situation, a place or an object is called phobia which is one of the types of anxiety disorder. A phobic person tries to avoid what he/she finds dangerous. The person imagines the simple thing as a threat as a cause of terror. A phobic person gets extreme distress while facing the source of the phobia. It prevents such person from acting and functioning normally and even panic attacks can occur. But this anxiety disorder is curable. Some of the most common phobias are:

Social phobia is one of the most common phobias. People suffering from this phobia feel the fear of being judged or parted away from some social gathering or being ignored by someone. These people avoid facing people and get intimidated in social gatherings. It is not shyness rather the person is frightened of meeting many people and get agitated immediately. The person gets fearful when he has to answer a telephone or ordering in some restaurant is also an extreme fear for him.

It is the fear of height. A person gets intense fearful when he looks at the ground from some altitude that causes significant anxiety. According to research, most of the people are suffering from this phobia. Feeling anxiety while seeing from the top and getting fearful is not un unusual. An acrophobic person feels fear even by crossing the bridge or by standing on a mountain and seeing the surroundings. Such people are even fearful when looking outside the plane in the air. This extreme fear often even not allow the person to simply climb the tree or ladder.

The anxiety disorder when a person feels fear of getting entrapped or getting helpless or embarrassed. Using public transportation, being in open or enclosed places, being in crowded places or standing in a line cause fear and anxiety attacks.  Such people always depend on others like they do nothing or never go anywhere without some relative or friend, they avoid going to public areas and sometimes it is so overwhelming that person do not leave home for a second and does not meet anyone. It can be challenging because it needs to be confronted.

Irrational fear of being in closed or in unopen places can lead to panic attacks. These panic attacks occur in an elevator, airplane or even in small rooms without windows. Even wearing tight neck shirts can result in claustrophobia. It is like a panic heart attack.

It is the fear of blood that is abnormal and persistent. A person frightens even from his\her own blood. Such phobic people cannot even look at pictures containing blood painting and sometimes such people fear their own thoughts regarding blood.

This excessive and irrational fear reaction may turn into shame after reacting abnormally strangely and irrationally in front of people. All phobias are connected to some specific thing. These fears lead to the disruption of a person’s daily routine whether in school, personal relationships or at work.