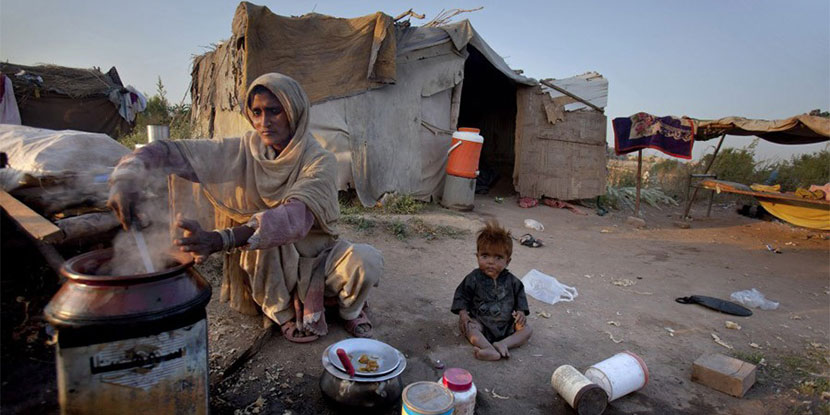 The issue of poverty is deep-rooted in Pakistan. The number of people, living below the poverty line is around 25% of the total population. Today, around 50 percent of the population is impoverished and finding it difficult to guarantee food for their families.

The balancing act of any nation to end the difference between the rich and the poor is, first, setting up the foundations for nation building. Steps for setting the basics like the economy, defense, and development determine the direction of the nation. Fixing the economy requires streamlining the agriculture, industries, and trade to generate employment opportunities and then employing the countrymen to make them prosperous and alleviate poverty.

Unfortunately, Pakistan has lagged in even setting the basic policy measures and due to that economy always remained in shambles. Poor economic conditions lead to dependence on foreign loans and socio-economic disharmony. This lead to fewer business opportunities and unemployment kept increasing day by day.

It has been said that during the 70s that 22 families were in control of the economy of Pakistan. PPP government under the leadership of Zulfiqar Ali Bhutto nationalized a lot of industrial units to absorb a lot of unemployed workforces. But the situation worsened due to lack of planning and since then, no government could succeed in eradicating poverty properly.

Pakistan’s about 72 percent of the population is attached to the agriculture sector directly or indirectly. It is a recognized fact that without eradicating poverty, the economy never gets on strong puttings.

Pakistan has the best irrigation area of the Indus basin but the irrigational advancements of the rest of the world have not been incorporated and the system of cultivation is still conservative. A lot of portion of the agriculture sector has yet not transitioned into the advanced mechanized way.

The feudal system of different rural areas is also a hurdle in poverty alleviation. Serfdoms prevail in all the provinces and peasants are given just marginal wages and the shares of revenues generated from the grown crops are taken by the big landlords who spend it on purchase of precious vehicles, big houses, and a big portion also goes to litigation and political activities.

The farmer who is responsible for the cultivation remains hand to mouth. Industrial units also exploit the employees. Workers are usually employed through contractors who extend the wages to the workers which are quite low.

Moreover, this is the new trend which is expanding rapidly in Pakistan that not only workers rather the staff, working in the offices are also employed on a contract basis. This is not only in private sectors but also in a public sector organization. This is the worse way of depriving the employees of benefits like medical treatment, house rent, conveyance allowance, and GP funds, etc.

Due to weak fiscal and monitory policies of the government, opportunities of employments are not increasing rather, taking different pleas, the mill owners, and traders use their powers to fire their employees usually. In recent years, a big number of local industrial units have been shifted to Bangladesh, Vietnam, and Malaysia. As a result, unemployment increased, and obviously poverty.

Besides the above-mentioned reason, the strong intervention of the World Bank and IMF are the most important reasons for increasing poverty in Pakistan. Under the pressure of these international financial institutions, governments impose different types of taxes on the already burdened middle class.

Food insecurity is a big issue in Pakistan and food shortage is the cause of many problems. It leads to malnutrition and many other diseases that kill the poor and they never live up to see a better day in their whole life.