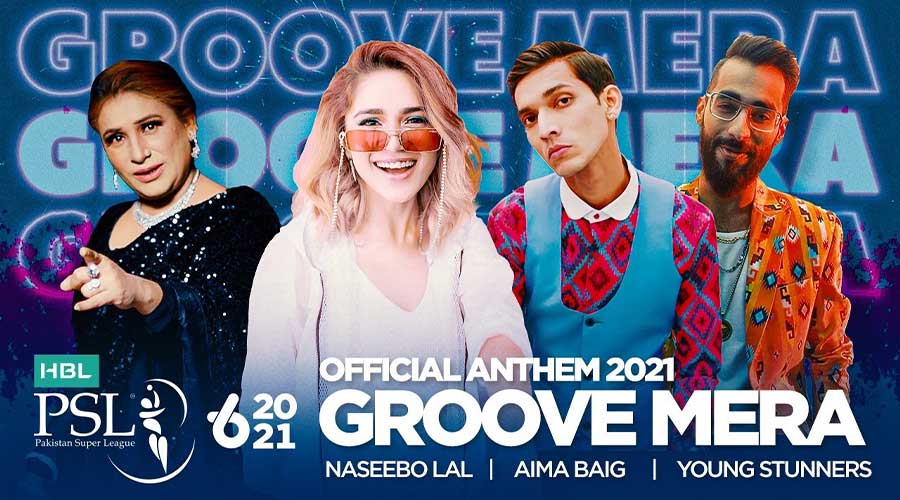 On Saturday evening, the PSL anthem was released featuring Naseebo Lal, Aima Baig and Young Stunners (Talha Anjum and Talhah Yunus). It didn’t take long for Groove Mera to go viral, with some praising it for its distinctive composition and others criticizing it.

Amongst those celebrating the anthem was actor Mehwish Hayat. She called it “bold and fresh” and said it should avoid being criticized by people.

Meanwhile. Waqar Younis claims that the song will rock the Pakistani stadiums.

This song is an expression of Pakistan Super League fans love and closeness to the game. The anthem also pointed the coronavirus aftermath, where stadiums are deserted but spectators are seen viewing the match in their homes in front of TV screens.

PCB Director Commercial Babar Hamid said, “The sixth edition of the HBL Pakistan Super League “Grove Mera” blockbuster anthem will help connect fans to the league, we have not compromised the quality of the anthem, so hopefully, and this anthem will be appreciated by fans at home and abroad.”

Babar Hamid added more that, “The legendary Naseebo Lal and pop star Aima Baig have their own personalities. The next stage after the release of the anthem is the arrival of cricket fans at Karachi National Stadium and Lahore Gaddafi Stadium, where they will get to see exciting matches.”

“In Karachi and Lahore, a limited number of spectators heading to the stadium will now enjoy both Cricket Action and Groove Mera.”

Meanwhile, the mega cricket tournament begins in Karachi on February 20. In the opening game, defending champions Karachi Kings will play against the 2019 Quetta Gladiators winners.

Within the National Stadium, approximately 7,500 ticket spectators will be allowed per match day, while around 5,500 space will be available to the Gaddafi Stadium.