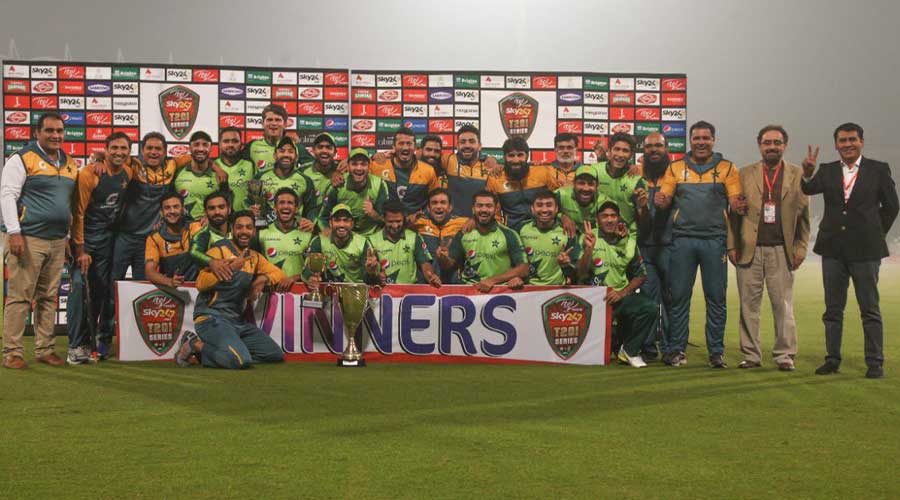 With the four-wicket win over South Africa in the third and final T20 at the Gadaffi stadium in Lahore, Pakistan became the first international side to post 100 wins in T20 matches.

With the brilliant Zahid taking 3-40 and Nawaz 2-13 to leave the tourists in a spin in Lahore, the Proteas were trembling at 65-7 and dreaming of the plane home.

The left-hand power hitter David Miller showed some resilience as he hit an electric 85 in just 45 deliveries to push South Africa to 164-8.

Shamsi’s excellent 4-25 made things even more difficult for home side, but Pakistan eventually sealed a four-wicket victory with eight balls to spare.

Before aiming for one too many and seeing the spinner find a wide gap, Pite van Biljon (16) hit Hasan Ali for three consecutive fours in the sixth over.

idHeinrich Klaasen (0) top-edging to short fine leg and Janneman Malan trapped lbw, as debutant Zahid takes both wickets. Zahid had a third when he trapped the star of second T20 Dwaine Pretorius who scored only 9 runs.

However, after this, it was Miller’s magical moment, as South Africa’s hard hitter single-handedly fought for his country while slapping seven sixes and five fours in a spectacular knock.

Before unloading for four sixes from the final set off Faheem Ashraf to give Pakistan a genuine chase, Miller cleared the ropes a few times off Zahid on the 13th over.

With Shamsi booked Hussain Talat (5) and Asif Ali (7), things got even more tense, with Babar’s productive 44 coming to an end between those dismissals.

As th Pakistan side was trembling, Faheem dropped for 10, but Nawaz (18) and Hasan (20) steered the hosts over the line, as Hassan Ali scored a six towards midwicket to seal the T20 series.